KLUB Kildare’s Ruadhan Kane, has retained his place in the Republic of Ireland 20 man U17 Squad which has been announced by Head Coach, Colin O’Brien, ahead of three UEFA Under-17s European Championship Qualifiers that begin in Cork next week. The inclusion of Ruadhan in the squad is a great honour for himself, his family, his club and for soccer in Kildare. 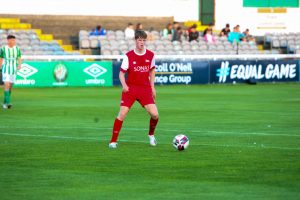 Klub Kildare’s Ruadhan Kane, has been included in the Republic of Ireland U17 Squad for the European Qualifiers next month. Photo; Pat McNally

Ireland will take on Andorra on Thursday, 7 October followed by North Macedonia on Sunday, 10 October  and Poland on Wednesday, 13 October  in the first round of qualification for the U17 EUROS.

All games will be at the home of Cork City, Turner’s Cross, with fans able to back the Boys in Green with tickets priced at €5 for adults and €1 for kids/students/OAPs.

Prosperous lad Kane, who impressed in friendlies against Mexico also in Turners Cross last month which saw around 1,000 fans watch Ireland U17s beat a strong Mexico side 2-1 and Head Coach Colin O’Brien is calling on Ireland fans to come out in numbers to support his exciting young team.

He said: “The players were speaking after the win over Mexico about just how much the crowd encouraged them and got behind them and I think that shows just how vital the supporters can be during a game. They (the players) really felt that fan-to-player connection and having a crowd at Turner’s Cross was huge for us.

These are three big games that set-up our season and I’m sure the Irish fans will be there to get behind this young and exciting Ireland team.”

On his squad O’Brien added: “Having the National League run through the summer gave us a great opportunity to look at a lot of the players and that has helped us in our selection process.

There’s a very good dynamic within the team which I believe transfers onto the pitch. The players get on so well together and you see that on the pitch.

“I feel there are some really good players in this group with high potential and it is exciting to have them together for these upcoming games.”

Republic of Ireland U17 Squad