Kildare’s Mark Travers from Maynooth and the Leixlip pair of Andrew Omobamidele and Nathan Collins, have been included by Republic of Ireland Manager, Stephen Kenny, in his 26-man squad for the FIFA 2022 World Cup qualifier against Azerbaijan and the international friendly against Qatar early next month. 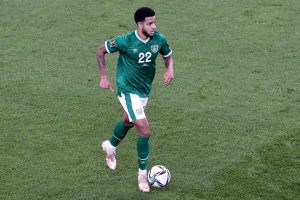 Leixlip’s Andrew Omobamidele included in the Republic of Ireland squad along with his Co Kildare colleagues, Mark Travers and Nathan Collins.

Goalkeeper, Travers (AFC Bournemouth) Omobamidele (Norwich City) and Collins (Burnley) were each included in the squad for the three internationals earlier this month although Collins had to withdraw for the third game against Serbia because of injury.

Ireland are set to travel to Baku for their qualifier against Azerbaijan on Saturday, 9 October  before returning to Dublin to take on Qatar on Tuesday, 12 October at the Aviva Stadium.

Wigan Athletic striker Will Keane has received his first international call-up to Ireland having scored four goals in the opening nine matches of the League One season.

Captain Seamus Coleman and defender Dara O’Shea are both ruled out through injury as Cyrus Christie retains his place in the squad, having been called up for the 1-1 draw against Serbia.