A full field of 16 runners will chase the lion’s share of the €120,000 prize money on offer for Sunday’s Irish EBF Auction Series Final which is the showpiece event on an eight-race card at Naas, six of which are backed by Irish EBF to the tune of €276,000. 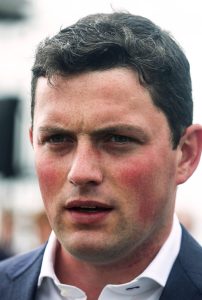 Sunday’s feature race is the final of the series which has boasted €699,000 in prize money this season all for horses that were purchased for €72,000 or less at designated public auctions.

Nine runners line up for the €30,000 Irish EBF Auction Series Nursery Handicap over the shorter six-furlong trip, all of which have performed in Irish EBF Auction Series races this year and with prize money down to sixth, only three of the contestants will return home empty-handed. Michael O’Callaghan will be hoping to continue his good run of form with Listowel maiden winner, Admiral D heading the field, Jake Coen claiming his invaluable ten pounds off the top weight.

The Noel Meade-trained Elysium, another graduate of the Irish EBF Auction Race Series, is the standout performer in the Garnet Stakes over a mile, while the concluding Bluebell Stakes is an intriguing encounter with Thunder Kiss, Barrington Court, Flor De La Luna and Zaqara all currently rated north of 100.

Gavin Cromwell’s €25,000 purchase Giselles Ausie, the mount of Leigh Roche in this Sunday’s Irish EBF Auction Series Final, was a winner on debut in the Irish EBF Auction Series Maiden at Navan when beating another of Sunday’s rivals, Chestnutter, by just a head and the trainer is hoping the Brendan Keogh-owned filly might snare some more lucrative prize money this weekend with the current spell of dry weather in her favour.“Giselles Ausie absolutely has a good chance if things go her way,” Cromwell said on Friday morning. “The better the ground the better her chance. She likes a bit of nice ground. She went to the line well at Navan first time and it was great to win on debut.

“Then in The Curragh, she was probably first off the bridle but stuck at it well and was always finding to the line.

“There is plenty of improvement to come in her and when she steps up in trip she’ll be better again. So the stiffer Naas test will stand to her.”

Cromwell’s Royal Ascot winner Quick Suzy is another graduate of this series and Cromwell has hailed the idea as “brilliant for Irish racing”.

A €20,000 purchase at Goffs last November, Quick Suzy bagged €15,000 for that win alone and in what has become a common theme in terms of foreign buyers noting the form of horses in the series, provided further return on that initial outlay when sold to American based Eclipse Thoroughbred Partners.

The Profitable filly then advertised the quality that can emerge from the series, as illustrated this year by the three graduates that have won Group 1s this year – Helvic Dream, Laws Of Indices and A Case Of You – when blitzing a high-class field in the Group 2 Queen Mary Stakes at Royal Ascot.

After soft ground scuppered her chances of joining that exalted trio of Group 1 victors in the Prix Morny at Deauville, the daughter of Profitable is now being prepared for the Breeders’ Cup Juvenile Turf Sprint at Del Mar.

“It’s a great series and it’s been proven. It’s a great opportunity for the so-called lesser horse but then we see the quality that has come out of it, which is great,” Cromwell added.

“Quick Suzy is good to go for Del Mar. She’s all set, in good form and we’re looking forward to it. It’s exciting.

“It just shows what you can get at the sales. And when I go, I am buying with the likes of the Irish EBF Auction Series in mind, absolutely. They’re just great opportunities and you have the added bonus of attracting potential buyers if you run well in them, as was the case with Quick Suzy. It’s brilliant for Irish racing.”

Another intriguing contender for Sunday’s highlight is De Vega’s Warrior who will be saddled by Joseph O’Brien for the Thoroughbred Racing Syndicate, headed by former Munster, Leicester and Ireland rugby star, Johne Murphy.

The Limerick maiden runner-up was bought for €34,000 with races such as this in mind and with prize money of €2,400 down to sixth place, Murphy is looking forward to seeing the colt take his chance this weekend but unlike Cromwell is hoping for some more rain to arrive.

“He was second in Limerick last week on what was a real bog. That was a sharp enough seven furlongs for him. You’re going to see the best of him as a three-year-old as he steps up to a mile, a mile and two and maybe even a bit further,” Murphy explained.

“Naas is a much stiffer test than Limerick but if he gets the ground he wants, he could go quite well. And the luxury of the series and the final is that there’s plenty of prize money down to fifth and sixth, so it’s very much worth taking your chance.”

Speaking about the concept of the Thoroughbred Racing Syndicate, Murphy added: “We bought yearlings last year with the Irish EBF Auction Series in mind, particularly with the value that was on offer and we will be doing the same. We are looking at those valued from zero to €72,000. It makes a big difference to be able to run in those races and as a commercial syndicate, to be able to sell them on then afterwards.

“We had a winner of one of the maidens this year in Relaxed Artist in Leopardstown and he was sold to an American owner to race out in America. Both Cynisca and De Vega’s Warrior have run in maidens as well.

“So there are a number of attractions for us. The prize money attached to the series is huge. Relaxed Artist won €17,700 for winning the race in Leopardstown so it’s very much worthwhile targeting the series if you qualify for it, even if you have that type that you feel is capable of mixing it in open maidens, because of the extra money attached.

“For us then, you’re in the shop window for all the foreign markets. And that makes it easier to go back to the sales and to attract future investors or people interested in getting involved racing.”

The first on a fascinating eight race card is due of at 1.10pm.