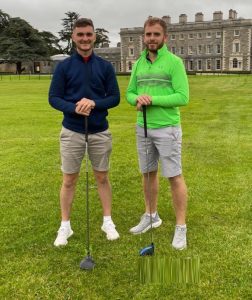 The World Amateur Match Race is a season-long match play knock-out competition that starts locally in Ireland and ends for the winners with a tournament final in Dubai against other nations from around the world.

The Kildare golfers took to the two-player match play, better ball competition, like ducks to water and progressed through the rounds to end up in the Irish playoff final in Carton House last weekend.

They would go on to secure a 2&1 victory to take the Irish crown and now head for Dubai where they will take on the other respective winners from around the world.

Speaking after the win, Cormac Browne said: “We can’t believe it, it’s like a dream come true! There was no way we thought we’d get this far when we entered the competition back in April.”

James O’Brien added: “We had a few close matches along the way but it’s great to get over the line. Roll on Dubai!”

The young golfers will now head for the UAE next month where they will compete on two of the world’s best courses including the Jumeirah Golf Estates’ Earth course which is home to the DP World Tour Championship, the culmination of The Race to Dubai and European Tour Season.
Filed under: Carton House Golf, Cormac Browne, Edenderry Golf Club, Golf Ireland, James "Murt" O'Brien, Rathcore Golf Club