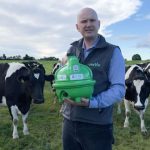 “The Irish business kept growing, but there was nothing from overseas,” explained the co-founder of Terra NutriTech Padraig Hennessy (41).

“In fact, we only took our first overseas trip a fortnight ago, and on the back of that we’re now launching in the French market,” he said on the phone from the Sommet de L’élevage, Europe’s largest livestock shows, in Clermont Ferrand in France.

“We just installed units in the Czech Republic and Germany, so finally things are starting to look up for us,” he said.

The brand new ‘ORBVIE’ makes mineral supplementation easier than ever before in fields or in sheds, and “gives full visibility and control to farmers from the palm of their hands”.

“It’s like having an extra pair of hands on the farm 24/7 as it reduces labour, eliminates waste, is easy to use and refill, alerts when needs to be topped up, and all the while helping farmers improve the health of their animals,” said Padraig.

“The device is capable of precisely dispensing mineral blends to any type of stock, from pre-calver and fertility mixes, bloat, magnesium and blends for beef animals,” he explained.

“One of the main benefits in using the dispenser is that this system is suitable for any size herd in any location, and it works away without any piping or electricity,” he said.

The dispenser retails at €600, and is totally manufactured at their base in Moone.

“We’ve ramped up from being a family farm into a manufacturing unit,” said Padraig, who along with his brother Tom (45) employ 23 people at Terra NuutriTech.

“Farmers are going to love this new mobile unit; it means farms of any size can now bring precision to minerals for their herds,” he said.

“We are entering a new age in farming where it’s all about precision, no longer hit and hope,” he said.,” he said.

“You simply connect it to you phone, select the product, select the animal numbers, select the dosage rate and hit start. Away it goes. This doses the exact amount minerals to that herd.”

Already, interest is coming in from all corners of the globe, including South America, Africa, Asia and Australia.

Encouragingly an independent IFAC survey on their OPIS mineral dosing system launched three years ago found that eight out of 10 of farmers experienced improved herd health, calving and fertility.

“We are looking forward to making that possible on any farm that partner with us,” he added.

The firm was founded in 2012 as Terra Liquid Minerals when the brothers recognised a lack of progression in the minerals industry and saw the need to develop an intelligent mineral dosing system.

In 2017, they expanded operations by building a new manufacturing facility to produce customised liquid minerals, and a year later they rebranded to Terra NutriTech.

Already, they are looking tot he future and are in development with BioAtlantis – a Kerry-based seaweed firm – and boffins at UCD to create a seaweed supplement that can reduce methane from cattle “and help make farming more sustainable”.

“If this works it will be of massive value to farmers. It’s of such importance, and it’s incumbent on every one of us to solve this,” he said.

“It’s like having an extra pair of hands on the farm 24/7 as it reduces labour, eliminates waste, is easy to use and refill, alerts when needs to be topped up, and all the while helping farmers improve the health of their animals”