Protest at Naas TD’s office has merit, if not numbers 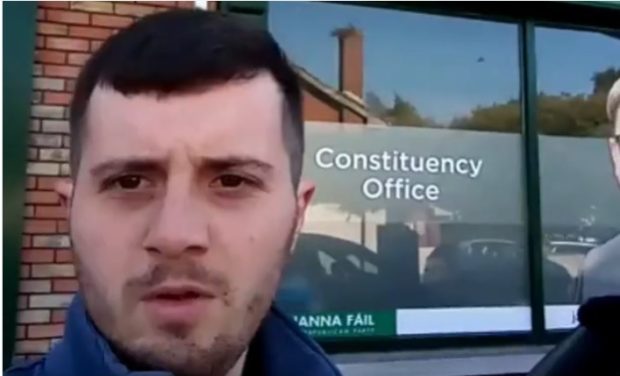 A PROTEST outside James Lawless TD’s office in Naas today 27 October against deficiencies in forestry policy seemed more interested in coverage than engagement, as the lone picketer didn’t even call in.

“They never even knocked on my door to talk to me!” said the surprised TD.

“I only found out afterwards on social media,” he said.

The protest was arranged by lobby group SEEFA – the Social, Economic, and Environmental Forestry Association – to target up to 140 TDs to see if they will do anything to solve the licencing crisis in the industry affecting up to 12,000 jobs.

This has meant that without licences, foresters can’t cut down or re-plant, which has led to a backlog in planting 15,000Ha (38,000ac) or about 40m trees, which has led to import costs, and the subsequent supply chain difficulties for the construction sector.

In fairness, this has not gone unnoticed in Leinster House as we’ have had the Chair of the Joint Committee on Agriculture, Food and the Marine Jackie Cahill says missed targets on afforestation “will continue to haunt us”.

“We have seriously missed our targets on afforestation, and are 15,000Ha behind target in the last five years,” he added.

“If those trees had to be planted in their lifetime they would have sequestered 5.4 million tonnes of carbon. We have really missed an opportunity to benefit the rural economy and in our fight against climate change,” he said.

With over 1,000 afforestation applications and thousands of felling and road licence applications still awaiting a decision, SEEFA is highlighting the severe social, economic and environmental impact of this crisis.

“Forest owners cannot plant their land, manage their forests or sell their timber.  For many owners, this is their pension or the manner to pay for education for their children, and the implications of this crisis will be felt for many years to come,” said a spokesperson for SEEFA.

“Previous governments have invested over €3 billion in this industry over thirty 35 years and over 20,000 farmers have committed their land to forest, these forests are now maturing, and private timber is ready to harvest. But instead, sawmills are having to import timber to meet demands of other sectors – particularly construction,” said Marina Conway, Western Forestry Co-Op.

Ireland is currently at its lowest ever rate of tree planting, while a massive carbon footprint has also been creating through importing timber.
“Afforestation is clearly the largest opportunity in the land use sector to remove carbon dioxide from the atmosphere, but Government afforestation targets are not being reached, and in 2020 only 2,300 hectares were planted of an 8,000 hectare target,” said Paddy Bruton, Forestry Services Limited and Euroforest Ireland.