LEIXLIP are considering not contesting Friday week’s Kildare LGFA Senior Championship Final according to their Manager, Matt Masterson and Captain, Aileen Quinn, who spoke to the Kildare Nationalist after training on Thursday night. 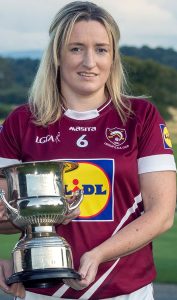 Leixlip are due to meet defending Champions, Eadestown, in the Final in Manguard Plus Kildare GAA Centre of Excellence in Hawkfield on Friday night, 5 November.

The senior championship was held up earlier because of a dispute around the Group Stages of the competition requiring the final to be rescheduled. According to Leixlip’s Manager, Masterson and Captain, Quinn it is the scheduling of the Final for a Friday night which is causing problems for the team as Matt Masterson explained,

“Leixlip are seriously considering not contesting next Friday night’s Senior Final based on players welfare issues. We have a number of players attending College in Galway, Belfast and Waterford. One of those players has a Medical Exam on Friday evening which she can’t get out of, another player has Lab work to do. These are young players have suffered a bit of stress because of that and they are now going to miss out on the County Final. Our players are united in the fact that this shouldn’t be happening to any young player.

However the other side of it is we have a number of minor players who may have to come into the squad because of other commitments of players booked prior to the rescheduling. That means that we may have to field a number of minors and if we have to do that then those minors are going to be asked to play on Friday night and then step back up again on the Saturday to play in their Minor Championship which is not good for player welfare. Also Friday evening for our players who work in Dublin is also a logistical nightmare. Some of them will have to look for a half day off work which is another player welfare issue. ”

“We have made our case but unfortunately we’re told the game in going ahead,” the Manager added. “At this moment in time we are training for a game that might not happen which is a sad reflection on ladies football. In addition younger members in the club would love to see the County Final but families won’t be encouraged to attend on a wet, cold Friday evening. It is the most prestigious match on the ladies calendar and it looks like it’s just thrown into a Friday evening. We are bitterly disappointed.”

Captain Aileen Quinn added, “It’s not good practice, it shouldn’t effect anyone’s professional career at all. When you see what’s happening in Meath where the ladies and the men’s finals are being played on the same day on the same grounds. In addition the whole run up to the game is affected for this the pinnacle event of Kildare ladies football.”

“If there are any accidents on the M50 or the N7 we could end up losing an entire backline. It’s not the preparation you need for the final.”

While Leixlip are are sympathetic to the organisers of the County Final Matt Masterson says, “this is the senior ladies football final and out of respect to the final and ladies football it should be given a prime place on a weekend day. There’s a line that sticks in my head in the Ladies Football Strategy of 2017 – 2012 which says, “We want to reach out to a new audience by making our sport more visible.” I don’t believe the scheduling of a County Final on a Friday evening fits into that vision of ladies football.”

A statement is awaited from the Kildare LGFA County Board on the matter.