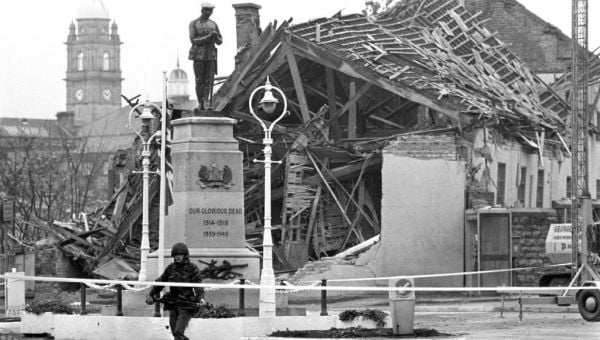 Jeffrey Donaldson accused the UK government of ignoring the opposition voiced by victims and all the main Stormont parties to the statute of limitations proposal.

He said while the local parties were set to vote against the plans at Westminster there was also an onus on them to draw up alternate measures that would gain the support of bereaved families.

In July, the UK government published a command paper outlining its intention to prohibit future prosecutions of military veterans and ex-paramilitaries for Troubles incidents predating April 1998.

Contending the criminal justice route was not delivering for victims, the command paper said a move to a new truth recovery model would help bereaved families gain information about the deaths of their loved ones.

The UK government has not yet published draft legislation that would give effect to the plan but Northern Ireland Secretary Brandon Lewis has signalled that a bill will be tabled in the UK parliament this autumn.

Mr Donaldson was attending an event in Co Tyrone on Thursday for families of Ulster Defence Regiment soldiers killed during the conflict.

He said it was a “matter of concern” that the UK government appeared intent on pushing ahead with measures many victims have branded an amnesty for killers.

“The meeting today I think will again reflect the deep concerns of many of the victims and their families about these proposals,” said Mr Donaldson.

“Our view is very clear – that it is wrong to remove the prospect of access to justice, that justice is an important part of our process of dealing with the past as we look to how we can move to the future.

“I don’t believe that the path to healing and reconciliation in Northern Ireland is made easier when you dispense with access to justice.”

He added: “We will oppose those plans in parliament as I know will other political parties from Northern Ireland, but I think here there’s a challenge too for all of us – that we need to bring forward proposals that offer the prospect of victims and their families having access to justice.

“I think it is incumbent upon us as political parties to put forward proposals that reflect the needs of victims across Northern Ireland.

“I think what we need to say to the government is that if we’re serious about building a consensus on how we deal with the past, then the way to do it is not to ignore the victims and not to ignore the political parties who speak on behalf of innocent victims.”

He was asked whether he was prepared to accept the prospect of further veteran prosecutions as part of any alternative plan to maintain access to justice.

The DUP leader insisted “no one is above the law”, however he said there had recently been a disproportionate focus on pursing cases involving State actors and not paramilitaries.

British prime minister Boris Johnson has claimed his government’s plan will allow Northern Ireland to “draw a line under the Troubles”.

The proposals also envisage an end to all legacy inquests and civil actions related to the conflict.

In 2014, the UK and Irish governments and a majority of Stormont parties agreed to a range of proposals to deal with legacy issues, including a new independent investigations unit to probe unsolved killings.

Those Stormont House Agreement measures have never materialised amid years of political wrangling over the thorny issue of the region’s troubled past.

The UK government’s plan represents a significant unilateral step away from the Stormont House structures.