Leading community retail group Londis has announce that it will sponsor Ireland’s Fittest Family show for a third year running. RTE’s hit family programme, now in its ninth season, returns to our screens on Sunday, 31 October at 6.30pm. 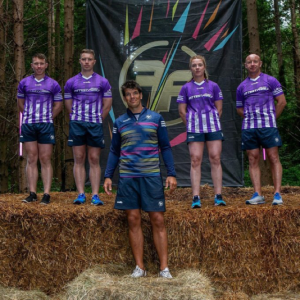 The Forde Family, Padraig, Roisin, Cian and Tadhg with their Coach, Donnacha O’Callaghan

The hugely popular show features presenter Mairead Ronan and a star-studded line up of coaches including Davy Fitzgerald, Derval O’Rourke, Anna Geary and Donncha O’Callaghan. Filmed on Kilruddery Estate in Wickow, 16 of Ireland’s fittest, fastest and strongest families gathered from across all four provinces to compete over 8 weeks for the title of Ireland’s fittest family in a series of challenges designed to test their physical and mental endurance.

Last year Kildare was represented by Liam Miley and his family from St Laurence’s GAA club and carry the flag for Lilywhites this year will be the Forde Family from Maynooth. We send our best wishes to Kildare hurlers, Cian and Tadhg as well as Roisin and Padraig.

To celebrate their sponsorship of Ireland’s Fittest Family and to reward local communities across Ireland, Londis has launched a competition for a lucky Kildare school or club to win a coached training session with hurling legend and show coach, Davy Fitzgerald. If you want Davy to put your club or school through their paces, you can find out more information and enter the competition at www.londis.ie

In tandem with their Ireland’s Fittest Family partnership, Londis has launched a new one million euro television and digital advertising campaign starring Ireland’s favourite duo Liam and Des as they go above and beyond in the name of Londis customers.

The adverts, a modern take on the Londis strapline ‘Local like you’, focus on how ‘Londis Listens’ to its shoppers, learns from them and tailors in-store offerings to reflect the needs of Londis shoppers. Liam and Des are key characters in the campaign as they listen to customers’ interactions and stock the store shelves accordingly.

Coach and Ireland’s Fittest Family creator Davy Fitzgerald was on hand today to announce Londis’ renewed sponsorship of the programme. “As we move further into 2021, I hope Irish families enjoy watching the 9th season of Ireland’s Fittest Family and that they are inspired to take action and ownership of their family’s health by getting active and making better decisions at mealtime. It is great to be involved for another year and the have the continued support of an Irish brand like Londis.”

Conor Hayes, Londis Sales Director said: “We are delighted to continue our sponsorship of RTE’s Ireland’s Fittest Family. The show is a perfect fit for Londis, it’s a family show that gives local heroes a chance to represent their families, parishes and counties on the big screen in a healthy, fun and competitive way.