IRELAND senior women’s head coach, James Weldon has named three Kildare players in his extended 17-person squad for the FIBA Women’s EuroBasket 2023 Qualifiers. Leixlip’s Aine O’Connor and Sorcha Tiernan (both Leixlip Amenities Liffey Celtics) and Monasterevin’s Claire Melia (The Address UCC Glanmire) who each stared for Ireland during the Small Countries Competition during the summer have deservedly been included again. 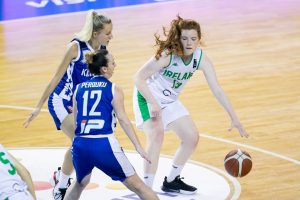 Ulster University’s Abigail Rafferty and WIT Waterford Wildcats player Kate Hickey both represented Ireland at the FIBA U20 Women’s European Challengers in Hungary during the summer. Trinity Meteors player Sarah Kenny has also previously been capped at underage level. There is a first call up for Maura Fitzpatrick, with the Connecticut native currently playing for Gloucester City Queens in the WBBL.

Fitzpatrick is not the only overseas-based player in the squad, with Anna Kelly, who is with Belgian club Spirou Ladies Charleroi, also selected. There are 12 Irish clubs are represented, with three players from DCU Mercy, while Trinity Meteors, Leixlip Amenities Liffey Celtics and WIT Waterford Wildcats have two players each.

Ireland will play their opening qualifier against the Netherlands in Amsterdam in two weeks time, on November 11th, followed by Czech Republic on November 14th at the National Basketball Arena, in Dublin.

Ireland head coach James Weldon said: “The team are excited to be back playing at the highest level internationally, but are also keenly aware of the formidable challenges that lies ahead. We are looking forward to getting the team together during the international break in November. The process of rebuilding the team will continue over the three international windows, as players learn to play at this elite level.”

Ireland are in Group I of qualifying which also contains Belarus, who they will face in the second FIBA Women’s EuroBasket 2023 Qualifiers window, in November 2022.