LEIXLIP have tonight confirmed that they will play in the Kildare LGFA Senior Football Championship Final against Eadestown, which is fixed for Friday night, 5 November at 8pm. 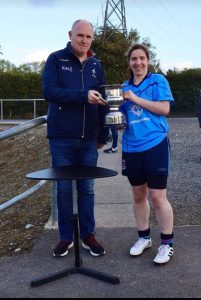 On Thursday night last Leixlip manager, Matt Masterson, told the Kildare Nationalist in an interview that non participation in the final was under consideration by the club, citing the fixing of the game for a Friday night as well as player welfare issues as reasons for their unhappiness.

Last night Kildare LGFA announced that the Final would go ahead on Friday night 5 November in the Manguard Plus Kildare GAA Centre of Excellence in Hawkfield with an 8pm throw in rather than  7.30pm as originally planned.

Eadestown are the defending champions and are favourites to retain the title however Leixlip had a decent League campaign and came through a difficult Championship Group as well as beating Sarsfields in the semi final so they will certainly be out to cause an upset.

A full preview of the Final, including Manager and Captain interviews, will appear on these pages on Thursday.