Athy man introducing people to the world of simulation training 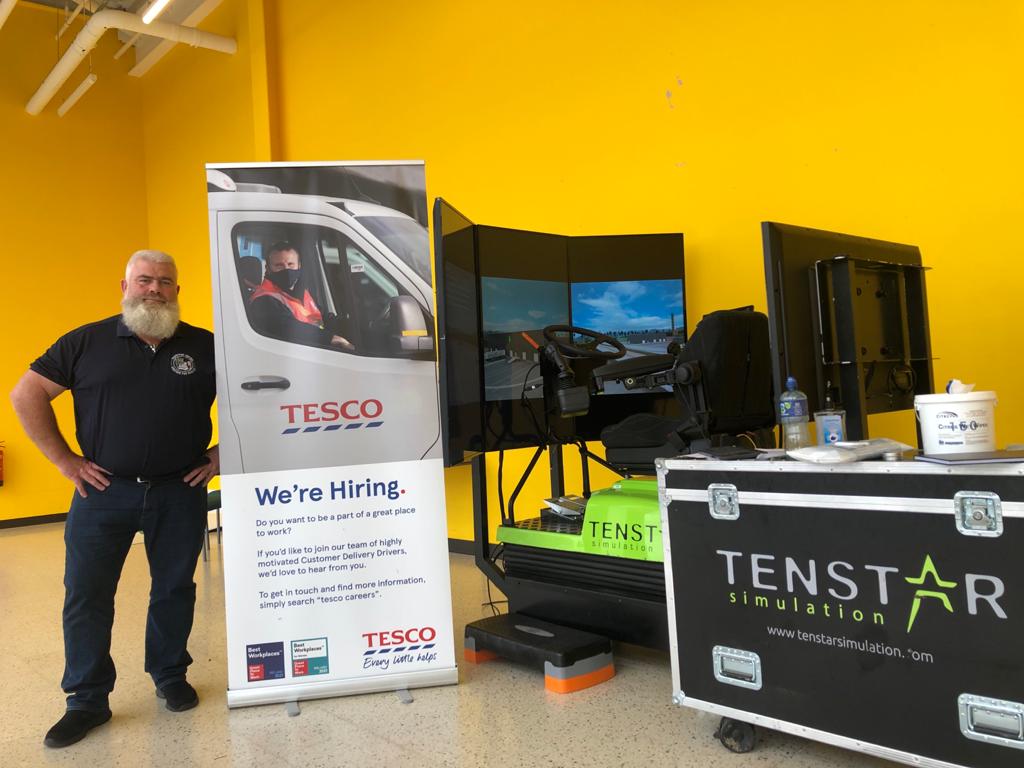 In the space of two hours one recent evening, I drove a tractor and an articulated lorry around an obstacle course, navigated a quarry behind the wheel of an articulated dump truck, did a shift lifting steel bars on a building site with a tower crane, dumped several rocks into a skip with the help of a digger, and made several deliveries around a busy market using a rigid truck.

Ordinarily, that sort of experience would necessitate massive amounts of coordination, not to mention money and insurance and possibly a transporter from Star Trek. However, with Athy man Barry Keatley’s utterly engrossing and realistic Tenstar simulator, it was just a matter of loading the next vehicle on screen!

Through TalentPool Virtual (TPV), Barry provides virtual training for a wide range of vehicles and machinery. Sitting across from me at his kitchen table, Barry explained that he recently spent a week in Maynooth doing a trial for Tesco, who contacted him “wondering could the simulator be of any help to them.

“It just seemed to work very well… they were getting a true assessment of the capabilities of the drivers and it was giving the drivers a realistic view of the size of the vehicle [van] and getting to use mirrors.”

The simulator, Barry said, introduces people to new life skills, adding that “there’s so many different opportunities out there” and that professional drivers can’t be got. “At the moment, you can see the crisis that’s going on in England for the lack of lorry drivers, figures were released in England about two months ago where they were short 100,000 drivers and it’s really showing now when you see all the queues and empty shelves and all like that. And we’re not too far behind them because we just can’t get drivers here,” he said.

Barry was left in a wheelchair after an accident in 2000 and despite this returned to machine driving while still a wheelchair user. He got a qualification in training and development and from there became a registered trainer delivering FAS/SOLAS CSCS courses. Through sheer determination and positive outlook, Barry no longer uses a wheelchair and has established a successful career in plant machinery training. Today he’s one of the most knowledgeable and sought-after plant machinery trainers in Ireland.

The simulator Barry uses is quite the impressive machine, allowing students to practice extreme situations and operations without risking injury or machine damage, for example, while it also leaves a minimal climate footprint compared to a traditional machine running on fossil fuels.

It’s immersive to say the least. Sitting atop a motion base facing a bank of three screens (with a fourth behind me), controlling vehicles via a steering wheel (complete with indicators, gear lever and a horn), joysticks (for machines like cranes and diggers) and two pedals, I disappeared into a virtual world and the evening went by in the blink of an eye.

A variety of vehicles are available across a range of industries – track excavators, bulldozers, tower cranes, telescopic handlers, cars, trucks, tractors and combine harvesters just to name a few. And the exercises aren’t all just about driving – students can interact with the machines by, for instance, doing a mechanical inspection.

All training sessions are automatically saved and stored in the system – the exercises can then be watched again from any chosen angle and at any given time, helping students improve their driving. The Tenstar scoring system offers scoring results based on safety, quality and economy and a complete exercise report containing the student’s score can be exported as a PDF for closer evaluation.

Students in schools, for example, could get access to and insight into vehicles worth six figures or more – machines that otherwise they’d likely never touch. Barry pointed out that the articulated dumper I piloted would be worth quarter of a million; the tower crane a couple million. “Whenever are they going to get a chance to sit on something like that?” he asked. “Not every kid is going to get a job as an academic or anything like that and it’s just to show that there [are] other avenues out there for them, and there’s good money in professional driving.”

The view from behind the wheel of an articulated lorry

Rehabilitation and providing potential opportunities for prisoners is another possible outlet for what Barry offers. He recently spent a few weeks in Mountjoy – Barry explained that simulators are being used in prisons in England, he ended up doing a demo in Mountjoy and “we did a couple of weeks up there… [it] went down very well, for the first time ever during any course that they’ve ever been through up there, the [prisoners] did not want to take a break… it was just full on for the length of time I was in it.”

He added that the prisoners were saying “it’s giving them such a chance because now they have something, you know, kind of a new skill coming out, something to look forward to and it gets them out of the circle, because they said if they don’t come out and get into employment, they’ll get sucked back in again.”

Mark Walsh, Chief Officer, Work Training in Mountjoy, told the Kildare Nationalist that he had done some research and got in touch with Barry to see what he could provide.

Noting that he has a team of Integrated Sentence Management (ISM) officers, who interview prisoners, Mark said: “We found that we were looking for people that [were] coming close to release and that they had an interest in working in some of these machines… they were all interviewed. We got the outside agencies which are IASIO [Irish Association for Social Inclusion Opportunities], Mandy Doyle is our Training and Employment Officer, we had Mandy in on the interviews as well, we selected our candidates, we [did] a demonstration with Barry, it was absolutely fabulous what could be taught, so we got approval, we got it going. We selected candidates and when Barry came on-site, we had him for two weeks.”

Speaking of the candidates, Mark said that “after the first morning, they wouldn’t even stop for a break, they wanted their dinner brought down to them, they were so enthusiastic… they were just so involved.”

He said they all passed “with flying colours” and, though a pilot scheme, there are already two people who have gone through the training and secured full-time employment.

Mark said it was “a great experience to have it” and noted that “we had a team of people onboard from Care and Rehab, you know, IASIO, ISMs and fully supported by the governor.”

“We will be running it again and we have a list at the moment of people that want to get involved,” said Mark. “It’s the way forward, if you ask me.”

The opportunities are certainly there – Barry reiterated that, at the moment, “the construction industry are just crying out for people, they can’t be got. Drivers across all different sectors, you know, whether it’s agriculture, transport, construction, quarrying, they’re not available. There’s nobody trained up in that profession now. There’s people don’t know how to get the training in the profession. There’s no actual training available out there for them. And it’s hard to get a start on any of these machines for the first time, because they’re all so expensive.”

Barry told me that he had researched simulators and looked at the different companies doing them, but it was the Tenstar model that caught his attention “for the amount that it had to offer, it had the graphics, the controls, the value for money. They’re a Swedish-based company and… I’ve built up a very good relationship with them and they’re happy to let me look after their dealings here in Ireland now as well. I’m kind of their point of contact here when it comes to showing the machine, demoing the machine.”

Companies certainly seem to be catching on to the potential benefits – a leading civil engineering firm, for example, had a safety week recently and asked Barry to bring the simulator to it “because they want to actually put the likes of their engineers and their banksmen and all into the actual seat of a machine to show them what a driver can actually see. And they want to trial a few of the drivers on it as well.”

Before our conversation drew to a close, I asked Barry if it was his dream to have his own training centre. He replied that “it’s to have a centre where people can actually come, they can come to learn the different machines, their own companies can send them to get assessed on different machines, the likes of employment agencies and that as well or companies when they’re taking on guys – rather than putting them on a machine that could cost potentially half a million, they can put them onto this, no risk of doing damage. It’s completely green and that as well… there’s no pollutants, you’re not burning diesel or anything like that, there’s no downtime of actual machines, you know, which is costly to any company.” He added that it’s “a safe and risk-free way of learning how to drive.”

Interested in learning more or getting behind the wheel of a virtual vehicle? You can contact Barry on 087 6258232, [email protected], or check out tpv.ie.