EADESTOWN LGFA team are out to make history in Hawkfield on Friday night by winning back to back senior county titles and everyone at the club is really looking forward to the game according to Manager, Gavan Doyle and Joint Captain, Roisin Ellis. 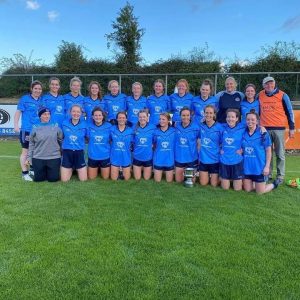 “Last year we got to a county final and we worked hard to get to it but the disappointing thing was there were very few spectators present (because of Covid restrictions) and the players couldn’t really celebrate or their achievement couldn’t really be appreciated. This year, regardless of the date, I’m sure there will be a good crowd there and the players will be ready to go,” Manager Doyle, now in his second year with the club, said.

What are his thoughts on the 2021 version of his Eadestown team, we wondered? “It’s all very well documented that we have a couple of senior intercounty players in the squad and that’s fine but the key point for me is the growth of the younger players coming through. The likes of Sara Carroll has been immense, and she’s still a minor. We also have Aine Mernagh; Ruth Sargent has been unbelievable. She is following in the footsteps of her father and her mother; Barbara would have been the first Kildare captain and her Dad played for Kildare too. People look at us as a club and say we have a huge talent in and around the team but we’ve lost a few players this year as well, due to injury or other circumstances, but the younger players have really stepped up. Grace (Clifford, Kildare captain) gets huge profile, and rightly so, but if you look under the surface a little bit more the work and the effort gone in by the younger players, from playing minor or U16 football straight into senior Division 1 is a very tough ask and they have been doing brilliant.”

Having to play club League games without county players, Grainne Kenneally, Siobhan O’Sullivan, Hazel McLoughlin and Grace Clifford meant that Gavan Doyle and his Management team had to rely on other players at the club. “We didn’t have a brilliant League but as regards giving players game time it has been hugely beneficial to what we’ve done in the championship so far this season,” Doyle believes.

A convincing win of 3-17 to 1-4 over St Laurence’s in the semi final holds no worries for the manager. “The thing that would worry me, however, is the lack of game time or practice or challenge games we could fit in or get in at all between the semi final and now because of the minors and camogie. For the last few weeks it’s been about keeping players fit and healthy and keeping them hungry.”

Looking forward to Friday night’s Final against Leixlip, who they defeated convincingly in the first round of the championship, the Eadestown manager sees this as a whole new ball game. “Look you can’t go on that result. They would have learned a lot from it and they have kicked on a good bit since that result. A final is a final and any final is always toughly contested and we’re expecting no more than that on Friday night. Doing back to back titles is difficult but it is well achievable if the players play to the ability that the can play to. The biggest thing that Brian (Willis, Assistant Manager) and I have tried to bring into it, is the self belief and the willingness to push them on to believe in themselves. Look not everyone is going to be a Grace Clifford or a Grainne Kenneally but if a girl plays to the best of her ability that’s all we can ask. The players have been doing that and they have  been delivering on it so we’ve been delighted with them.”

“I’m looking forward to the players showcasing how they can play and the ability they can play to. There’s huge talent in Kildare, not just in Eadestown, and I think for both clubs in the final on Friday, it’s a great opportunity regardless of the time, regardless of the day, to showcase the ability and the talent that’s in club football in Kildare.”

One of those players to whom Gavan Doyle will look to on Friday night is Join Captain, Roisin Ellis, who could be described as captain courageous, having spent time, after finishing college in Waterford, working firstly in Alaska in the outdoor disability sector and then in New Zealand in health promotion where she played GAA and AFL as well.

It’s Roisin’s first year as Joint Captain and she cites the online line classes the players and management undertook in strength and conditioning and injury prevention at the start of the year as having been beneficial in the players progress through the championship. “The minor and junior players would have joined in those sessions as well and during the League, when we didn’t have the county players, it made them all the more familiar with us and now Marian Ryan, Joint Captain,  and I have become involved in training our U16’s who won their League.”

Ellis is full of praise for the club’s management team led by Gavan Doyle and Brian Willis. “They have instilled that commitment and drive that’s needed from us. It’s been a long year but they have kept us motivated and they have a very open environment where if people want to make suggestions they are happy for us to do that.”

“Because we didn’t have the county players during the League a lot of players had to go into new positions so we expected a lot more of ourselves and that gave us a lot more confidence and experience. Now that we’re all back together with all the county players for the championship, our whole team is a lot stronger and everyone wants to be involved in the game more.”

Ellis believes that there is a great intensity about the team as evidenced by their victory over St Laurence’s in the semi final. “Sometimes in the past if we were winning in the second half, we would have had the mentality of look we’re doing well now and we’d allow teams to come back at us so in the last few games we’ve been trying to keep the mentality that the game is not over until the final whistle blows. We’re really demanding more of each other as players to keep driving on and to maintain possession when we are in winning positions,” she explains.

“Every game we play is a challenge for us. In the Confey game they came back at us and if there were a few more minutes in that game they could have potentially beaten us so we don’t take anything for granted anymore. We don’t focus on the score we just focus on doing things right and not make mistakes.”

Most people were expecting a repeat of last year’s final between Eadestown and Sarsfields and we wondered if, at the back of her mind, the Eadestown Vice Captain was thinking the same way? “Sarsfields really put it up to us last year so I suppose we did think it was going to be them so we knew what to expect so it was a bit of a surprise (when Leixlip came through). We’ve played Leixlip quite a lot and Gavan and Brian would be quite good on briefing us on what to expect so hopefully there will be no surprises on the day.”

Gavan Doyle is very impressed with Eadestown as a club. “It’s a lovely country club with no airs and graces and everyone supports each other. The driving force in Eadestown, even before we were there, is Gerry Kavanagh. He deserves huge praise and huge plaudits for what he has done. There has always been huge support there for the ladies team and we’ll be expecting huge support on Friday night,” the manager concludes.

Eadestown play Leixlip in the Kildare LGFA Senior Football Final in Manguard Plus Kildare GAA Centre of Excellence at 8pm on Friday night.