Leixlip Out To Cause A Surprise

THE Leixlip LGFA team has already caused a surprise by defeating finalist favourites, Sarsfields, in a high scoring semi final and they are convinced that they haven’t finished with the surprises as yet as they face defending champions, Eadestown, in the Kildare senior final on Friday night. Leixlip beat last year’s finalists on a score line of 3-11 to 3-7 in that semi final. 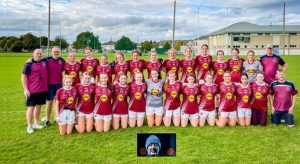 “Preparations are going very well and as you know all clubs in the country were affected by the Covid restrictions. We had 18 months of having to live through individual sessions and we were very lucky to get programmes to the players prior to the start of the League via Zoom classes and the players got very engaged in it,” Leixlip Manager, Matt Masterson told us.

“The League was a bit topsy – turvy for us. We had three defeats and two wins and that was the way we wanted it to go and we ended up in a semi final against Sarsfields that went to a shoot off and that was quite unique for us as a club. It was a bad way to go out of a semi final and it was difficult to take. We then prepared for the Championship and now we’re obviously in a final. We had a tough game against Sarsfields, a tough game against Confey and we took a bit of a beating from Eadestown. We were in the toughest group but we showed true character  to play against two teams that had given us a beating before and come out the right side of it.”

Leixlip Captain, Aileen Quinn also reflected on their championship group. “We also had Suncroft as well in that Group and they are a team that is really after coming along in the last few years so we really fought in a tough group there.”

Was the fact that Leixlip had fewer players on the county panel any benefit to the team, we asked Aileen? “We had a few players who were on the county squad at the start. Those on the intercounty panel who weren’t getting played found it very tough at the start because they couldn’t play League for us and they weren’t getting a game with the county and I know a lot of other clubs found that very tough as well. It was a very strange predicament playing the League without your intercounty players but everybody was in the same boat as well so we all had to get up and get on with it.”

Manager Masterson adds, “The absence of the intercounty players for the League gave an opportunity for other players to get out there and play and it allowed us to get a lot of younger players blooded into the squad. We now have a good mix of young players and more senior players, experienced players like Aileen, Maria (Moolick) and Joanna (Timmins) as well as Aisling (Savage) Grainne (Lyons) and Tara Hallinan. All seasoned players and they have brought on the younger players.”

“We’re in a very good position although that couple of week’s of waiting for a decision from the Co Board (on an earlier Group match) didn’t help. That was really, really difficult for everybody, we didn’t know whether we were in or out and once you don’t have a clear focus it makes it very difficult. However that’s the process, you can’t really blame anybody, due process must be allowed. If we were in the same position we’d expect people to have patience too.”

“Confey were fully entitled to do what they did and that’s why CODA was set up. It fell our way but it was all due process,” Aileen Quin  agrees.

Reflecting on his squad and the mix of young and experienced players, Matt Masterson says, “we are very blessed with the group of senior players who are very open and welcoming to the group. They’re not closed and at every opportunity they integrate with the younger players. We don’t isolate any little  group. We’ve trained our minor and our senior teams together and I believe that’s helped the younger players to come through. It’s a big step up for young players to come in to senior training and it can be intimidating but in this group, no, and there’s an intermix also with the Management Team as well. Damien Long and Michael Doherty are with the minor and senior teams.”

“The minor players that have come up have been absolutely brilliant,” according to captain, Quinn. “They’ve just rowed in and they’re training really hard with us as well and even in the last few weeks we’ve seen a lot of the minor group coming along which is brilliant to see. As Matt has said, it’s really hard to come into a senior team like that  and, you know, to players who have been there for two many years, like some of us, but they’re a joy to watch and it’s a joy to see them coming on as well.”

“Some days I’m hoping they’ll take my spot,” Aileen laughs, “but a lot of us that are above the 30 mark, who would have been around to see the club go from Junior to Intermediate and then to Senior, want to make sure that the torch is being carried on again. We can’t wait to see these girls come up and show what they can do and if one of them were to take my spot, great. Eva Turley has been helping out one of the younger teams; we’re all wearing the same jersey.”

Matt Masterson agrees, “it’s great to have competition and we’re a lucky club to have the numbers coming through and the conveyor belt is strong. The majority of our senior players are also giving back to the club, which is a huge thing, and it shows the younger girls that it’s not just about playing football. A lot of the girls are involved with the academies and the younger teams  and that’s a great example and role model by the senior players.”

Leixlip didn’t read the script for the semi final. “We knew going into the Sarsfields game,” Quinn says, “that we were the underdogs and we’re fully aware that we are the underdogs going into the final but we don’t mind that at all. We don’t like reading scripts. We’ll play our game. After we were in the final in 2019 we might have been a bit naïve but we’re a bit more focused this time. Eadestown have really set the standard this year but we’ve changed our game a good bit. That Confey game was as good as any game as you will get and that’s what we needed. We’re a different team than we were at the start of the championship.”

Leixlip play Eadestown in the Kildare LGFA Senior Final in Manguard Plus Kildare GAA Centre of Excellence, Hawkfield at 8pm on Friday night.