DEFENDING champions, Eadestown retained the Kildare LGFA Senior Football Championship thanks to a two goal two blitz just before the second half water break after they had trailed Leixlip by four points coming up to half time in the Final at Manguard Plus Kildare GAA Centre of Excellence in Hawkfield on Friday night. 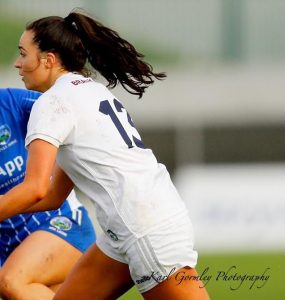 An early exchange of points by Grace Clifford (play) and Emily Birch (free) saw the sides level for the only time in the game and although Grainne Kenneally put the holders ahead with a free they were rocked right back by a great Leixlip team goal which was expertly finished by Maria Moolick in the 10 minute and the former county player popped over a point two minutes later as Eadestown looked stunned.

Points by Ruth Sargent and Sara Carroll saw Eadestown regain their composure to trail by just a point at the water break, 1-2 to 0-4. Immediately after that break Leixlip outscored Eadestown by 0-4 to 0-1 with Moolick, Birch, Grainne Lyons and Emily Dagg all raising white flags for the Radley Park side with the only response coming from a Kenneally free for Eadestown.

That was as good as it got for Leixlip though as Eadestown points from Tara Bedford, Clifford and Sargent cut the deficit to a single point when Clifford was fouled for the penalty which Angela McGuigan converted to put the holders 1-8 to 1-6 up at the break.

The game fully turned Eadestown’s way with a two goal blitz just before the second water break with Clifford first of all setting up McLoughlin for the goal and then adding her team’s third goal with aplomb on 43 minutes.

Leixlip lost Maria Moolick to the sin bin a minute later as Kenneally and Dagg also incurred the wrath of Referee, Eoghan Dagg in the final 10 minutes and Eadestown went on to retain the Ciaran Burke Cup.

Herity Names Side To Face Carlow In Kehoe Cup