By Pat Costello
THE Junior hurlers of Broadford and Maynooth as well their Intermediate counterparts of Naas and Maynooth again, take centre stage for the Finals of the UPMC Hurling Championships in Conneff Park on Saturday with the Juniors throwing in at 12.30pm and the Intermediates at 2pm. 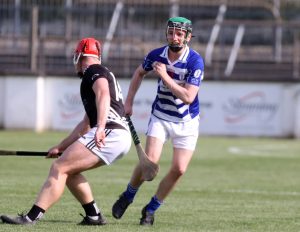 Tadhg Forde, Maynooth and Brian Tobin, Naas will be in action in the UPMC Intermediate Hurling Championship Final in Conneff Park on Saturday Photo: Sean Brilly

It’s great to see Broadford back in a Kildare hurling finals again. The club from the north west of the county were noted exponents of the small ball game in the past winning the Kildare Senior Championship twice, in 1960 and 1961. They have also Intermediate hurling champions on six occasions and Junior champions on nine occasions.
Broadford were also dominant in camogie circles winning the senior championship on no fewer than 16 occasions with the great Miriam Malone among their ranks.
It’s been a long time since Broadford have been in the limelight so those who have pushed for the revival of hurling in that area of the county deserve great credit for their patience and forbearance and above all else determination in keeping the game alive.

Broadford face a Maynooth team, a club that is continually referenced by Kildare Manager, David Herity, as all that is good about hurling in the county. The club is making serious strides with the sliotar at all levels in the county.

Broadford probably caused a bit of a surprise by beating current county hurling kingpins, Naas, by five points in the semi final. After a good start in which they led by five points at the break, Broadford had to withstand a remarkable Naas recovery in the second half. Led by an eight point haul from Dean Hanley the club from the Offaly/Meath border came through with aplomb to win by five points, 0-13 to 0-8.
As well as the ever reliable Hanley, who’s eight point haul included six frees, Broadford also had scorers in Caelum Flanagan, Aaron Smith, Luke Flynn and Jack Sutton, a great family name in the Broadford club.

A good start by Maynooth too helped them to a 2-14 to 1-9 semi final victory over Coill Dubh with the goals coming from John Gaule and Cormac Nolan. Maynooth, too, are a proud hurling club with six senior county titles in the early year of the club and six intermediate titles. A minor A hurling title this year shows that they are a coming outfit in hurling.
On the evidence of the semi-finals this should be a very tight affair and playing on the good surface of Conneff Park should allow the players to express themselves. There will also be a sprinkling of footballers on both teams who will be anxious to finish a job they weren’t able to do as footballers this year.
Broadford will bring that never say die attitude to the final and although Maynooth will be favourites it could very well be that Broadford’s semi final performance might just stand to them on the day.
Maynooth V Naas games are becoming more frequent these days and each game brings a level of anticipation before hand and an equal level of excitement during the games.

The Intermediate Final between the holders, Maynooth, and Naas, is one such game that many are as eagerly awaiting. The sides met in the 2020 decider in July of this year and after a couple of false starts over the years Maynooth finally came good to with win on a scoreline 2-15 to 0-18. The pity was that their endeavours didn’t result in automatic promotion to the senior championship as they had to face a Promotion Final the week after the Intermediate Final in which they just fell short.

Goals from the exciting Kildare U20 player, David Qualter and Joe Millett were instrumental in the “2020” Final victory. Both teams are backboned by players with huge club experience added to those who have gained vast intercounty experience during the summer months with the Kildare seniors, U20’s and minors and what a summer of hurling excitement they provided for Lilywhite supporters.
For Maynooth Cian and Tadhg Forde are great campaigners and they have been a driving force in Maynooth over the last number of years and are probably having their best season ever. Dual player, the exciting Cathal McCabe, is a player who Glenn Ryan and David Herity may yet fight over such is his ability in both codes, but even at his young age he is vital to Maynooth’s performance in the final.
Add in the aforementioned Qualter as well as Harry Dunne, county sub goalkeeper, Sean Bean and Conor Nolan and you can see how Maynooth won the 2020 title.
In that final Naas were reliant on the experienced Eoin O’Hehir, he scored 0-8, seven frees and a 65. However they too have talent in Peter Moran, Conan Boran and the former exciting county minors, Ferran O’Sullivan and Charlie Sheridan
Maynooth are very strong in defence in that final and in the subsequent 2021 Group game and are proven goal scorers and with that combination they will be favourites to claim back to back titles.