IT was a fantastic day on Saturday at Naas for Henry De Bromhead and Rachel Blackmore with Captain Guinness getting the better of Andy Dufresne in the Grade Three Popular Square Chase over 2m. The Tipperary Jockey had a four timer at the Kildare track. 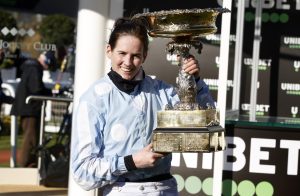 Rachel Blackmore had a four timer at Naas on Saturday including the win on 6/5 favourite Captain Guinness Photo: INPHO/Dan Abraham

Captain Guinness justified 6/5 favouritism by landing his seasonal debut by 4¾ lengths with Felix Desjy another 9½ lengths back in third. This Henry De Bromhead trained 6-year-old finished third in the Arkle at Cheltenham earlier this year and then unseated Blackmore at Punchestown.

All that was put behind them on Saturday as this son of Arakan is now 20/1 from 25/1 in the betting to win the Champion Chase at the Cheltenham Festival next year.

Another captain was winning on Saturday with Captain Tom Cat obliging in the Grade Two Novices’ Chase at Wincanton for jockey Charlie Hammond and trainer Dr Richard Newland. BoyleSports make this 6-year-old 33/1 for the Marsh Chase.

Mac Tottie was a lovely 20/1 winner in the Handicap Chase at Aintree for trainer Peter Bowen and is now 33/1 from 66/1 for the Ladbrokes Trophy.

Sarah Kinsella, spokesperson for BoyleSports said: “Rachael Blackmore rode a four-timer on Saturday at Naas with the fancied Captain Guinness running out a comfortable winner of the Grade Three Chase. He is now 20/1 from 25/1 for the Champion Chase having jumped brilliantly at the Kildare track. It will be exciting to see where he goes next.