A dramatic 1-1 in the closing minutes saw Kilcock and Ballymore Eustace emerge from the darkness of St Conleth’s Park on Sunday last to hopefully light up our sporting lives in the replay of the Auld Shebeen IFC at the Grand Old Lady of GAA Stadiums on this Saturday afternoon with a 1.30pm. 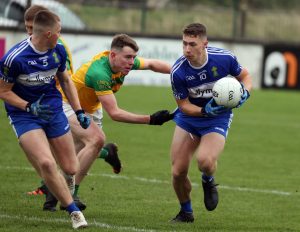 Caolan Halpin and Jason Gibbons in action in the drawn game. They’ll be in action again in the replay on Saturday, Photo: Sean Brilly

Kilcock will feel that they have been involved in, or have given us enough drama, in this competition after last year’s one point loss to neighbours, Clogherinkoe, and now Sunday last when they allowed Ballymore Eustace to come back at them with the Hugh Campion Cup seemingly in their grasp.

During the week Manager, Cian Flanagan, had the task of lifting the spirits of his shell shocked charges. They were favourites to take the title and remain so, but the experience of the closing stages of the 2020 and 2021 finals will surely snap at confidence. There are enough players of note on the North Kildare team to do just that with the likes of Daniel Courtney, Jason Gibbons, Cormac Divilly out the field as well as forwards Shane O’Rourke, Shane Farrell and Findlay Nairn capable, individually or collectively of taking them over the line.

Across the Liffey Ballymore Eustace Manager, Ronan Joyce, will have a different challenge, bringing his players down from Cloud 9 after last Sunday’s draw. They probably have the momentum a little bit with their dramatic comeback but Joyce will be telling his players that they were never really out of the drawn game at any stage.

Shane Barrett was vital to them as usual last week but Michael Stewart Byrne, Caolan Halpin and Simon Murphy are all capable of mixing it with the best on the big day.

Who will win the replay? You might as well ask, who will win the lotto! But just as the Lotto can be won so too can the 2021 Auld Shebeen Athy IFC and even if they have been caught at the death in the last two finals Kilcock still have the aces to finally deliver.