Newbridge Or Naas For The Dermot Bourke Cup

“For 21 years is a mighty long time” goes the line in the song. Try putting 117 years to music then! As our colleague, Richard Commins, told us in his preview in this week’s Kildare Nationalist, we have to go back to the 1904 championship for the last time that Sarsfields and Naas met in the Senior Football Final. Quite how that has happened not many can explain. 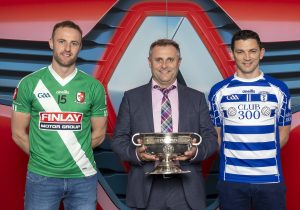 Suffice to say, based on form in the 2021 Joe Mallon Motors SFC, the bookies got it right by installing Sarsfields and Naas as favourites to make Sunday’s decider once the Preliminary Round and Round 1 of the Group Stages were concluded.

The Sash’s only blip came in the final game in the Group stages when they lost 0-18 to 1-10 to Celbridge, a blip they overturned in the semi-final by grinding out a victory over the same opposition with a late flourish, which yielded them a 1-13 to 0-11 result with young Callum Bolton getting the late goal.

Naas came through the championship unbeaten and although they had to contend with some internal strife over recent weeks, player – manager, Eoin Doyle, steadied the ship to see his side win a semi final over Maynooth, 1-17 to 1-9.

Thanks to our good colleague Richard Commins again, we know that Sarsfields have recorded 17 -102 while only conceding 3-59 while Naas have a 10-99 to 6-72 record. Included in those two score lines are two “veteran” players in Eamonn Callaghan, the Naas captain, who has scored 2-29 while his Sarsfields counterpart, Alan Smith has an equally impressive 4-14 to his name.  Both have belied the “veteran” tag with style this year.

As well as Smith, Sarsfields have spread their scores through Shane Doyle, Ben McCormack, Dan Nea and Barry Coffey while Callaghan has been supported in the scoring stakes by colleagues Darragh Kirwan, Alex Beirne, Dermot Hanafin and Sean Cullen.

Both teams like to play open, attacking football, which is a welcome sight so we should be in for an exciting contest and with Billy O’Connell in charge, he likes to let the game flow.

Sarsfields have the experience of winning six of their 25 titles in this millennium and four of them since 2012. Big game experience in abundance there. Naas have yet to trouble this millennium as far as adding to their eight county titles is concerned but they have huge intercounty experience at all grades and in both codes to make up for any inexperience on County Final days.

Sarsfields were firm favourites with the bookies but the odds on Naas have shortened considerably. The draw seems out of the question though. The expectation is that Sarsfields will continue the Newbridge domination of the Dermot Bourke Cup but Naas will be anxious not to record their only championship defeat of 2021 in the Blue Riband Final.