CLANE RFC fell to their first defeat since September on Sunday in the face of a fine Tallaght performance. The crisp winter sun gave both sides a good platform to play in, and they made the most of it with some free-flowing attacking play. 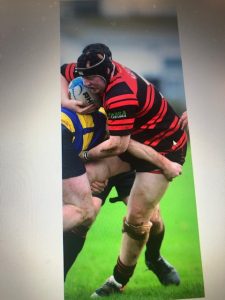 Tallaght struck first through Adam Nolan, scoring from an early scrum under the Clane posts. Robbie Hyland quickly replied with a penalty, but Tallaght extended their lead via Rob Hudson after a kick through wasn’t dealt with properly by the visiting team.

Clane moved the ball well with plenty of offloading throughout the game, probing for gaps in the hosts’ defence as they looked for a way back into the game. A cross field kick from Hyland was fielded brilliantly by Ciaran McMahon, who almost got in but was tackled short of the line. McMahon had the presence of mind to look for a runner though, and found Hyland to finish a brilliant move.

Clane were unable to hold off until halftime though, and strong running from Simon Collie saw him touch down for Tallaght’s third, giving them a 19-10 lead at the half.

Clane started the second period brightly, and their smooth offloading game almost allowed them to cross the whitewash again. Such a style creates risk however, and Tallaght were able to capitalise on some loose passes. Alan Moore was the first to intercept, sprinting clear of the covering tacklers. Hudson matched him soon afterwards, giving Clane a mountain to climb.

That didn’t prevent them from trying to climb it however. A great try from Oisin Shortt was quickly followed up by a superb effort from Glenn Predy, his 4th of the season. A series of offloads from Predy and Shortt between each other brought Clane from their own 22 all the way to the line. This closed the gap to 11 points, and Clane were in touching distance of both losing bonus points at the very least.

Bumper Week Of Sport In This Week’s Kildare Nationalist