Naas Out To Make History

AFTER bridging a gap of 31 years last weekend to win the Senior Football Championship, Naas are out to make further history for themselves as the hurlers look to win three Senior Championships in a row by defeating their long time lords and masters, Celbridge, in the UPMC Kildare Senior Hurling Final on Sunday in St Conleth’s Park, throw in at 2pm. 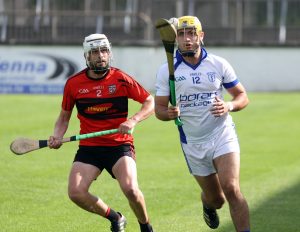 Celbridge, themselves, completed the hattrick of titles in 2009, 2010 and 2011. Two of the Naas hurlers, Brian Byrne and James Burke, could also have the distinction of winning both football and hurling championships in the same year, a feat not too often achieved in Kildare.

Both defending champions, Naas and Celbridge have justified favouritism by reaching Sunday’s Final and now the County Town team must live with tag for the Final itself.

Naas have amassed a total of 24-112 (184 points) in their five game unbeaten run to the Final while only conceding 4-52 (64 points). 5-21 of their total was scored against Celbridge in the final game in the Group stages.

Celbridge, too, were lethal in front of goal, scoring 12 -85 (121 points) in the four wins out of five but they have conceded 7-73 (94 points) with Sunday’s opponents, Naas, having a big hand in that side of the equation.

As you might expect Jack Sheridan has been top scorer for Naas with a haul of 6-23 while his cousin, Brian Byrne, has chipped in with 2-28. Others on the high scoring stakes for the defending champions were Cathal Dowling, who is having a great year for club and county, with 5-11, James Burke with 2-17 and Shane Ryan with 4-8.

Despite injury issues Gerry Keegan has returned 1-35 to become Celbridge’s top scorer while the ever green, Sam White, has contributed 0-19. Niall O’Regan (3-7), Jamie Connolly (0-8) and Colman O’Donovan (2-1) have all scored freely for the eight times champions.

(Thanks to our Reporter colleague, Richard Commins, for all those stats).

Celbridge Manager, Patrick O’Flynn, is acutely aware of the enormous task that Naas will pose for his side who have recovered well from their shock semi final defeat to Confey in the 2020 Championship. He has a nice blend of experience and youth with players of huge county final experience in the likes of Niall O Muineachain, Mark Moloney, Fergal Conway, Pa Curtin as well as the aforementioned Keegan and White.

In the opposite corner is another Kilkenny man, Tom Mullally, who has kept the Naas side boiling nicely over the last couple of years and all the way through the 2021 championship. The five scorers we mentioned above get all the headlines but in Cormac Gallagher, Kevin Aherne, Simon Lacey, Kevin Whelan, Rian Boran, Conor Dowling and Richard Hogan they have the players who can do the defensive duties and apply the assists.

That final game in the Group stages will have no bearing on Sunday’s final and Celbridge will really put it up to Naas. It will be a close affair for a considerable time in the game but the ability of Naas to score goals, score from distance and spread their scorers throughout the team should see them pull away in the final quarter and lift the Tony Carew Cup for an historic third time in a row and the ninth time in all.