By Kevin Egan
A St Mary’s Edenderry team which contained players from Balyna and Carbury just came up short in their first round Leinster Schools “A” Football Championship against Marist College, Athlone in Kiltoom on Tuesday afternoon. Two goals from Senan Baker, son of former Clare hurler Ollie Baker, were the key scores that powered a second half comeback from Marist College.
For 40 minutes of this contest St. Mary’s were the better side, albeit aided by a very strong breeze in the first half. Yet their control of the play was exemplary, and they made use of their advantages. A dozen shots on goal yielded eleven points and in every facet of play, St. Mary’s looked very strong. 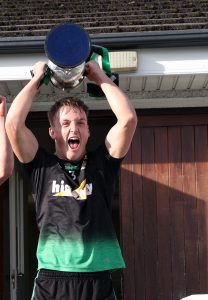 Defensively they held firm against a very mobile and sharp Marist College attack, they exerted huge pressure on the home side’s kick outs into the wind, and up front their scoring was excellent. Josh O’Donoghue (Balyna) and Páidí Farrell kicked some wonderful points from the corners, Fionn O’Grady (Balyna) offered a solid focal point and target in the full-forward position, while Seán O’Haire’s (Balyna) dead ball striking from distance was immaculate.
0-11 to 0-4 at half time became 0-13 to 0-4 when Conor Ennis and Josh O’Donoghue struck the first two points of the second half for St. Mary’s, however a free from Baker in the 39th minute set off a tremendous run of Marist scores. Matthew Whittaker and John Martin fired over points as the Athlone school shot five in five minutes, then the game’s big break came when Paddy Higgins seized on a short kick out to play in Baker, and the Caulry man made no mistake with an excellent low shot to cut the gap to a single point.
Tom Kelleher and Baker followed up with sensational long range points to edge the Marist in front and while St. Mary’s stayed in the game and twice drew level, by now the Marist had taken control of the midfield battle.
The tie was still in the balance up until the 58th minute when Mulvihill won another turnover and set Baker off on a strong run down the left flank. When most players would have taken the option of a simple point, the roving attacker sensed there was more on and he broke through the full back line and fired into the roof of the net to confirm their win.
MARIST COLLEGE: Andrew Stuart-Trainor; Jack Mulvihill, Michael Henry, Owen McNamara; Paddy Higgins (0-1), Tom Kelleher (0-2), Brian Connell; Tadhg Baker, Conor Hand (0-1); Bobby Nugent, Matthew Whittaker (0-3), Shane Lawless; Oisín Shortall, John Martin (0-1), Senan Baker (2-4, 0-3f). Subs: Ben Donegan for Nugent (half-time), Chulainn Dowd for T Baker (51), Harry Stuart Trainor for Higgins (57), Luke Sylvester for Martin (60).
ST. MARY’S  EDENDERRY: (B=Balyna, C=Carbury, BB=Ballinabrackey, E= Edenderry): Eoin Sheehan (B); Conor Ennis (BB), James Bergin (E), Michael Dowling (C); Dylan Byrne (E), Tomás Van Englebrechten (B), Ryan Rainey (B); Michael Brady (E, 0-1), Leo Cullen (BB); Luke O’Connor (B), Seán O’Haire (B, 0-4, 0- 3f, 0-1 45), Mark McCarthy (E, 0-1); Josh O’Donoghue (B, 0-4), Fionn O’Grady (B, 0-2, 0-1m), Páidí Farrell (E, 0-2, 0-1f). Subs: Cian Murphy (E) for O’Connor (19), David Hill (B) for Ennis (19), Dan Dowling (C) for Farrell (53).
REFEREE: Seamus Mulhare (Laois)