AFTER the high drama of two weeks ago, the Newbridge College Junior Cup squad finally got celebrate in the school last week and had the opportunity to thank all their loyal fans for the wonderful support that they received over the course of their magnificent Cup run. Now it’s time to look forward and get back onto the pitch and get back to doing what we all love… playing sport in Newbridge College. All of the other teams have been busy playing away so below are some match reports and results from last week. 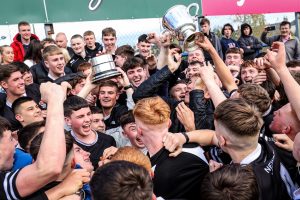 Friday 5 November
RUGBY
Leinster Senior League SCT v Kilkenny College
The Senior 1st XV continued their League campaign as they welcomed Kilkenny to the College on Wednesday.  The College found themselves two tries down in the first 10 minutes but managed to narrow the gap with a try of their own.  This seemed to have more of an effect on the visitors and they hit back with a third try.

They stretched their lead further but the College dug deep and narrowed the gap again with two more tries.  With the clock against them the College worked tirelessly to further close the gap but, as is the case in these sorts of situations sometimes, as they pushed the ball wide in
one attack, but it was intercepted and Kilkenny killed the game off with another try.  The game finished up 43 – 17 to the visitors.

The Senior 2nd XV also took on Kilkenny and the game started with some really good, fluid rugby from the College. First half tries from Max Barry, Hugo Owens, Julian Zebedee and Chris Jennings, each converted by Ben Jones, saw the College to a comfortable 26 – 14 halftime lead.
The visitors would add two more tries in the second half which would sandwich one from the College captain Harry Farrell which Keane converted.   Both sides pushed for further scores with more open, attacking rugby but the game finished up in a 35 – 24 win for the College.
Notable mentions go to Max Barry, Ben Keane and Harry Farrell.
TY C v Portarlington
Newbridge College Transition Year Cs went into this game against a strong Portarlington after 18 months of intense training. Paudi Mahon had built a strong opposition but optimism was plentiful in the C camp. The Cs had built a strong side, captained by Max Aldren. There were many debuts being made, but the marquee signings of Max Brendel and Oisin O’Raghallaigh were the only starting debutants.
The Cs kicked off through outhalf Max Kennedy. An early setback beheld the Cs as captain Aldren was unfortunately forced off with a devastating injury after making a gargantuan hit and Tim Flanagan replaced him for his debut. The Cs kicked on nonetheless and Matthew Deasy was unlucky to drag a penalty kick towards the posts just wide. Portarlington then drove upfield and opened the scoring with a
controversial try, that the Cs claimed was never placed over the line.

The Cs were back an the front foot after an excellent restart from Kennedy put Portarlington in their own 5. James Kenny did well to win the ball back in the ruck, and Calum Doyle then crashed over the whitewash to open the C’s try-scoring account. Deasy then slotted the conversion to equalise.
The Cs continued in this vain for the duration of the half. Their dominance was capitalised on by Charlie Davis, who dotted a ball down in the corner following a fantastic pass by Andrew McCormack. Deasy the scored the conversion in spectacular fashion .  The dominance was continued throughout the first half, with the attack spearheaded by Calum Doyle, Con Lynch and Max Kennedy, who had taken the mantle of captain in Aldren&#39;s absence, but the team failed to capitalise further. The Cs went into half time with a
14-7 lead.
As Portarlington kicked off for the second half, the Cs were hoping to hold onto the lead. The game was slowed down successfully by the Cs, with Ross Feighan, Rob Molloy and James Kenny putting in stellar defensive displays while Con Lynch, Max Kennedy and Tim Flanagan were essential in effectively controlling the game. Killian Daniels, and his replacement Oran O’Donnell, were always a strong
attacking presence on one wing, while Ieuan Gabor Sweeney was unlucky to be denied a try by the bounce of his chip and chase. The Cs always kept Portarlington at arms length and as good as sealed the game after Ben Mullins intercepted a pass and scored the fourth try of the game, converted by Deasy.
It was all about seeing the game out for the Cs now. They did so, with Kennedy, Brendel and Flanagan in particular making ridiculously dominant tackles. The game was sealed after a Portarlington lineout was disrupted by Sam McGovern, and the Cs were victorious.
Eller v Castleknock
The Eller As hosted Castleknock in their first 15 a side home game of the season. An impressive display of open rugby with backs and forwards interchanging well saw them run out 57-0 winners. Eller C Black had a 40-17 win in a dominant display with the team as a whole showing great improvements in their work in and around the ruck. Standout players where Ryan Conroy, Eoin McGlynn
and Max Murphy.
Other Results
Inter A 76 – 0 CBC Monkstown; Inter B 70 – 0 CBC Monkstown; Eller B 36 – 26 Castleknock; Eller White 25 – 55 Castleknock
HOCKEY
Minor A lost 2-0 to Rathdown School.
Loads of effort shown and this team just needs more games to shown their improvement. Showed glimpses today of some nice passing patterns but plenty of work required on the training pitch!
Minor B won 1-0 against Our Lady’s. We worth their win and in truth should have had a second. Solid throughout and a very impressive performance against a physical Our Lady’s team. This will give the girls plenty of confidence going into the next one. Some very good performances in this one!