Friday 12 November
Leinster Senior Cup Hockey Newbridge College v Our Lady’s Terenure
NEWBRIDGE Seniors met Our Lady’s Terenure in the first round of the Leinster Cup on Wednesday 10 November. The team would have been feeling confident having had a win in the league v Kings Hospital and a few friendlies under their belt. The team were focused from the start and immediately set on the attack . For the first half the girls had many shots at goal and a few short corners . The Our Lady’s defence battled hard and  their goalie deserves a mention as they did well to keep a clean sheet up until half time . 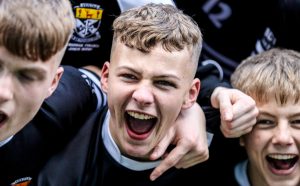 Newbridge College resumed the second half and continued their attack and played very calmly until at last the breakthrough came with a speedy run from Joy Duggan down the right of the pitch and a pass across the goal where Isobel Collins got a touch at the far post .

After this goal the flood gates opened and shortly after Newbridge had another very similar goal pass across the goal by Joy Duggan and
put away by Jodie Zebedee. The Kildare side continued the pressure with another goal assist again by Joy Duggan and put away by Beibheann Howard.  It was a great team effort and a nice bond is forming with this group. A great win and the team proceed to the 2nd round where they meet Loretto Foxrock. Date and time to be confirmed .
Newbridge College 2 Mount Sackville 1
Newbridge College marched on into the next round following a deserved 2-1 win away to Mount Sackville.  College did it the hard way coming from a goal down early on to  take a 2-1 lead by half time with the second goal very pleasing following a great team move.
That was how it stayed even though Newbridge had the chances to make the game safe in the second half. A third would have been deserved but the Kildare side were happy with the win.
RUGBY
Leinster Junior League JCT v Presentation Bray
Newbridge College Juniors started their league campaign away to Presentation Bray on Wednesday and came through a difficult game on a scoreline of 19-15. After conceding just before the first water break, Newbridge scored a great set piece try finished off by Paddy Neary. His partner in the centre,
Thomas Flynn scored from another set piece before half time. Jody Flanagan converted both tries.  Pres came out and scored to bring the score to 12-14 after a succession of a number of penalties gave them good field position.
Pres then benefited from another penalty in front of the posts and went 15-14 ahead with 12mins remaining.
Newbridge then went down the pitch and finished a maul with Thomas Flynn scored to put Newbridge 4 ahead. They held out with some solid defence to get points on the board and the league campaign off to a solid start.

The Senior 1st XV took on St. Gerard’s School in Newbridge on Wednesday in the last of their group stage games. A very tight game saw the visitors take the lead but the College hit back with a try of their own from Calum Corcoran and at the break the College led 7 – 5. The second
half saw a similarly tight game and both sides traded tries, Andrew Carroll dotting down for the College, before the Wicklow side pushed themselves into a 5-point lead. The College pushed hard to get a winning score but the visitors defence held strong and ran out 17-12 winners. The College must now wait on a delayed game to be played next Wednesday to see if they are to
progress in the competition.
The Senior 2nds also played St. Gerard’s on Wednesday and while their rugby was at times scrappy, they were always in control of the scoreboard. Two Paddy Ford and one Paddy Taylor tries along with two Taylor conversions saw the College lead 19-0 at half time. The second half saw the College push on further and despite the visitors coming close on a couple of occasions the College kept their line intact and further tries from Taylor, Ben Keane (2) and Harry Farrell, three of which Keane converted, saw the College run out 40-0 winners. Notable mentions go to Todd Lawlor, Billy Bohan, and Eunan Dempsey.
Rugby Results:
Senior 1st 12 – 17 St. Gerard’s; Senior 2nd 40 – 0 St. Gerard’s; Junior B 56  0 Pres Bray; Inter A 29 -12 Clongowes; Inter B 51 – 14 Clongowes; Inter C 32 – 34 Clongowes.