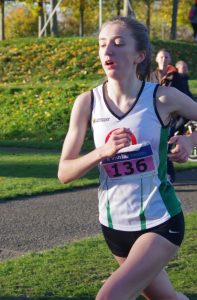 Aoife O’Cuill (St Coca’s AC) has been selected on the Irish Team for the SPAR European Championships next month Photo: Perri William

The selection on the Irish team is a just reward for Aoife’s performances all year as Perri Williams’s report in Tuesday’s Kildare Nationalist tells us. “Aoife has been performing well all year starting with a win in the U23 1500m All Irelands back in June and qualifying for the European U23 10,000m Championships. Back in October she finished 7th in the Autumn Open and the first U23 athlete home.”

They will be joined by Abdel Laadjel (Donore Harriers) who returns from action stateside as well as Dean Casey (Ennis Track AC), Scott Fagan (Metro/St. Brigid’s AC), and Sean Kay (Clonliffe Harriers AC) who all performed superbly in national championship competition over the weekend.

Athletics Ireland, National Endurance Co-ordinator, Matt Locket said: “We must acknowledge the outstanding work from athletes to put themselves in contention for selection at these home championships. The depth in the Nationals Cross Country championships was fabulous to see, and is a testament to the work of coaches around the country. We have a great history when it comes to European cross country competition and we are in no doubt those who have been selected are primed to take on the best in Europe in just a few weeks’ time.”