NAAS’ own Andy Lyons will be hoping to etch his name into FAI Cup folklore with Bohemians on Sunday afternoon when the Gypsies take on St Patrick’s Athletic at the Aviva Stadium. 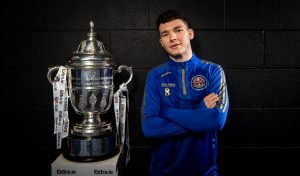 Lyons has been in fine form for Bohs all season long and has suitably impressed to earn himself further Ireland U21 call-ups.
But Sunday offers the 21-year-old a chance to add a medal to his name as a promising career awaits another one of Kildare’s brightest talents.
“We’re relishing the opportunity,” he explained. “Sunday is a big game and it’s one for the fans. I think the fans are really looking forward to it.
“It’s up to us to give them something to cheer about, but as a collective, we’re looking forward to it. We were at the Aviva in the summer, and we created some great moments for the club and for us as a team. I’m not going to read too much into that though. It doesn’t make thing any easier, but it is a great spot to play in. It’s a brilliant pitch and we’re all really looking forward to the game.”
While Bohs, and Lyons are well-versed to the Aviva Stadium surroundings, they are relatively inexperienced when it comes to cup final settings.
Of their current crop, only Georgie Kelly has played in a cup final before, but Lyons is encouraged with the culture that is building at Dalymount Park.
“I’m not sure how many of us have played in a cup final, but I don’t think it’s too many,” he explains. “The youth in our squad is something which has come through and has been prominent through the year.
“Not many people expected us to do as well with so many young players but the culture we are bringing around this place especially with the academy we have to bring through the lads from the younger age groups, and that has been massive for us.”
Heading into Sunday’s game, Lyons and Bohs are very familiar to their Dublin foes St Patrick’s Athletic, but they are not as familiar in facing them in front of over 30,000 supporters. And that is something that Lyons feels will feed into a different game between the familiar Dublin foes.
“Every game is different that we play so we can’t read too much into past performances,” he adds. “We’ve got to look at ourselves more so than ever and put our own performances in. In a cup final it’s a real cliché, but all form goes out the window. I think that it’s going to be the
same on Sunday. It’s something that we are relishing, and it’s our job to put in the best performance we can.”