RORY Feely sampled playing at the Aviva while playing in European Competition with Bohemians earlier in the summer and the Athy man is looking forward to playing there on Sunday as Bohs take on St Patrick’s Athletic in the Extra.ie FAI Cup Final (KO 4pm) in a match Feely is really looking forward to. “It’s all real excitement at this moment in time. During the week in training it was all about getting ourselves as excited as possible after the bit of disappointment last week. We’ve been able to put that to the back of our minds fairly quickly. It’s about getting everyone buzzing for the occasion that is this weekend,” Rory told the Kildare Nationalist. 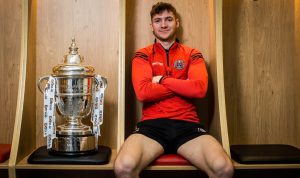 “Now that the League is over it’s more about can we focus ourselves and can we get back to the performances we feel we were getting earlier on in the season that we let dip a bit. If we can figure out what is is that we were doing and then see if we can we do it again on Sunday, basically.”

“We see ourselves as a “performance team” and that’s what we are looking for at the end of every game, regardless of the result. We feel that if there are certain things we can knock off a list every week then we are going to get the results. There was a period of time the results actually showed and everything was going our way then there was a drop in our form and in our performances. In the League if you are not consistent you’re not going to reap the benefits.”

Feely can play at either centre back or full back, where he faces competition from another Kildare man, Andy Lyons, but sometimes that versatility was a challenge for him during the season. “On a personal note the season started off very positively and I had myself within the starting X1 most weeks and I felt like I was playing fairly well. Then there was a drop in my own performances and with a strong panel that we have there is always someone else to come in and do the exact same job that you are doing. There’s healthy competition for places and it’s good for the players that they can never drop their standards. It’s also tough on Keith (Long, Bohemian’s Manager), he has big decisions to make every weekend.”

The 24 year old Athy man made almost 50 appearances for St Patrick’s Athletic over two periods with the club, including the 2020 season, but that will all be forgotten about in the Aviva on Sunday. “I was there last year and a couple of years before that but I don’t think it will have any effect on myself or anyone on the team for that matter.” he says. “It’s something that we are all pushing to the back of our minds, whether you know the lads on the other team or not so it’s all about our own focus and our own game as we are trying to get our own performances in order.”

Playing in the Aviva is a big deal for Rory Feely but so too is the FAI Cup Final. “It’s just such a huge occasion for the club, for yourself and your families that get to come to watch the game and come on to the pitch at the end of the game. It’s my first FAI Cup Final. I’ve been watching them before and speaking to people who have experienced it they say it’s really just a good occasion for friends and for family and for the player.”

What will his routine be for Sunday before the game, we wondered? I wouldn’t be the most superstitious or anything like that. We will have our pre match meal of course but I’ll just eat similar foods as if it’s a normal match. Breakfast is always porridge.  I wouldn’t be the most nervous or most superstitious so hopefully keep that for Sunday,” he says.

Rory’s Mum, Mary, is a renowned community worker and supporter in Athy and is a great supporter ,too, of Rory and his siblings. “I don’t know who she’s bringing with her to the game. You could have her and the two dogs behind as well,” he laughs. “I’m not sure what she’s bringing but she’ll probably still be heard no matter how many fans may be in the Aviva”

“It’s been like that since we were growing up whether it’s trekking us to games up and down the country or just being heard on the sideline, it’s second to none to have that support behind you.”

Rory is also conscious of the support he will get from the Athy area. “I got a few messages already from people from Athy and I heard that there are a number of them going to the game so I know there will be support from Athy there,” Rory Feely says confidently.