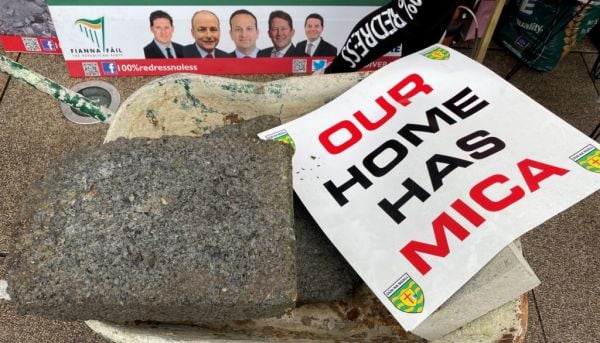 The Government finalised a redress scheme late last night for thousands of families in Donegal and Mayo affected by mica following a day of intense negotiations over increased rates for repairing affected homes.

Minister for Housing Darragh O’Brien will bring a memo to today’s Cabinet meeting outlining a revised scheme to finance the rebuilding of homes in counties Donegal and Mayo.

An estimated 6,600 homes have suffered serious structural damage arising from the presence of mica in the blocks used to build the dwellings. The bill for the scheme is likely to cost the State over €3 billion.

It followed agreement being reached between the Department and groups representing affected homeowners on the three outstanding issues: certification; the status of homes that have been excluded from the scheme; and the maximum allowable “per foot” cost to rebuild the homes.

According to The Irish Times, the latter point in particular had proved a real sticking point for the Mica campaign groups and for the Donegal and Mayo TDs who support them.

The Government had offered an average “per foot” rebuild cost of €138 per square foot.

Government sources last night said the final memo would contain clearer language that would give a better indication of the “per foot” cost than an average of €138, suggesting it would be higher in some cases.

This had been an issue of some contention. Government TDs such as Donegal Fine Gael TD Joe McHugh, and Fianna Fáil’s Dara Calleary (Mayo) and Charlie McConalogue (Donegal) have consistently said they fully supported the campaign. Mr McHugh had warned of defying the Government whip if the issue was not settled to the satisfaction of the campaign group.

He said he could not support a scheme that did not take into account inflation in the construction industry from 2020.

In a recent concession, the Government agreed to extend the scheme beyond principal private residences to also cover rental properties.