CLANE fell to their third defeat of the season despite a spirited performance away from home on Sunday last.
The game began scrappily, with the hosts piling on some early pressure. Ciaran McMahon’s defence proved crucial, nailing a covering tackle when a try seemed certain. The pressure continued however, requiring an intervention from Thibault Remark to win a penalty at the breakdown and allow his side to finally exit their 22. Clane relished the chance to play some of their own rugby, and a sublime 50/22 kick from Robbie Hyland gave them good field position to launch an attack from. It wasn’t to be however, as North Meath turned the ball over via Simon Deevy and launched a counter attack of their own. Remark was again vital, winning the ball back for his side at ruck time. 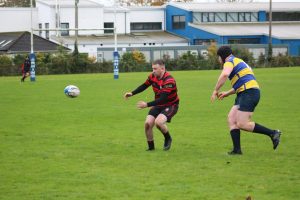 Joel Dyer was part of the Clane RFC side beaten by North Meath/Athboy on Sunday Photo: Martin Rowe

The first score of the game was soon to follow. A penalty allowed the home side into Clane’s 22, and they spread the ball quickly after that. Clane’s defence scrambled well to cover but the attacking side brought the ball back to the other side of the pitch and Deevy touched down from close range, breaking a few tackles as he got over. The visitors responded however, and controlled much of the rest of the half. They came agonisingly close as a dominant scrum brought them right up to the line, but a knock-on foiled their attack. North Meath were unable to clear however, and Clane regained the ball on the 5-metre line. The pack hunkered down for an assault as the half drew to a close, but
another knock on meant North Meath carried their advantage into the break.
Perhaps relieved at not conceding, the hosts attacked with renewed energy as the second half began. A powerful carry by Denis Canon from inside his own 22 gave his side field position, allowing Conor Grey to score. He added the conversion, leaving Clane with some work to do if they wanted something from the game. Excellent work on the ground from Enda O’Connell won a penalty, allowing them crucial field position. O’Connell then set about spreading the ball across the field, stretching and probing the defence. An excellent take from Brian Jones allowed him to somehow stay in field, and after what must have been 20 phases, O’Connell finally found the gap he was looking for and ran in a try under the posts.
The stage was set for a dramatic finish as the home side retreated. A clean break from Niall McGrath allowed them back into the 22 and Steven Dwyer made an attempt for the line, but was just about held up, allowing North Meath some respite. The defence remained solid, but the visiting side were not afraid to take risks with the ball, looking for that illusive gap to exploit. Eventually the Clane runners got isolated, and a turnover at ruck time meant they had run out of time, and North Meath had won the day
This was a tough loss to take for Clane, who played well but succumbed to handling errors at inopportune moments. Credit to North Meath/Athboy for their stout defence as the game drew to a close. This was an uncharacteristically low scoring game for the two sides, testament to the dogged work both made around the breakdown and at the set piece. The unpredictability of the league continues, with just 7 points covering the 4 teams in the chasing pack behind Portarlington. Clane round out 2021 with a trip to the league leaders next week.