IT’S Super Saturday as far as the hurlers of Maynooth and the footballers of Kilcock and Kilcullen are concerned as each is in AIB Leinster Club action on Saturday afternoon. 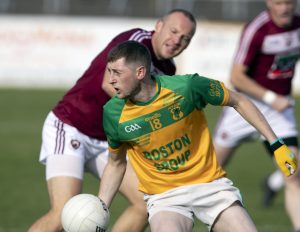 Maynooth hurlers have “home” advantage as they face Trumera of Laois at 1pm in Clane in the Quarter Final of the Leinster Junior Hurling Championship.

This has been a good year for Maynooth hurlers, winning the Kildare Intermediate Championship (twice) before emerging into the senior ranks at the second time of action following victory over Eire Og Corra Choill last month. That should give them the edge for Saturday’s encounter although one wonders if the postponement of the game from last week because of Covid issues will have any affect on them.

Trumera is the home club of former GAA President of the GAA Liam O’Neill and they have won the county intermediate championship in 2015, 2016 and this year so they will be formidable opponents. Their county final was played on 22nd October but they did defeat Longford Slashers 1-16 to 0-11 on 14th November so they should be fresh enough.

Taking all into account Maynooth should carry enough experience to see them advance to a Leinster semi final.

Kilcock Intermediate footballers must take to the road again as they face Tang of Westmeath in Tubberclair at 1pm in the Leinster Quarter Final.

It took a penalty save from Ciaran Heneghan at the start of the second half to spur Kilcock on to victory in their Round 1 victory over An Tochar of Wicklow in Arklow two weeks ago. They won convincingly by eight points in the end but the period after their county final victory was blamed for their, at times, lacklustre performance, particularly in front of goals. Expect them to be much better on Saturday as in Daniel Courtney, Jason Gibbons and Eoghan Mulhall, they have players of quality while the full forward line of Shane Farrell, Shane O’Rourke ans Findlay Nairn can be lethal on their day.

Tang had a bye in Round won so haven’t played competitively since their county final victory over Miltownpass which they won by a point, 1-7 to 0-9. That was their first championship in 28 years. Aidan Burke was their goal scorer on they day while they were superbly led by their captain, Kieran Duncan.

Ciaran O’Brien, with 0-5, led Kilcullen to victory over Wicklow’s Barndarrig two weeks ago but a couple of telling second half substitutions by Manager Brian McGrogan led to goals by Darren Barker and the experienced Shay Pembroke. That game will have benefitted Kilcullen immensely

Grange had a walkover from Laois’ Barrowhouse in Round 1 so they are likely to be less that “match ready” for this one which should give a battle hardened Kilcullen the edge to advance to the semi final.

The Curious Case Of The Defeat By Dublin – The Supporter