YES it was a fortuitous goal by Darragh Kirwan that won the game last time out for Naas but fortune favours the brave and Naas have been nothing if not brave in Championship 2021, at home and in Leinster. Many would have given up when the initial shot was blocked but Naas and Kirwan, in particular, didn’t stop and were rewarded with the winning goal to see them through to an AIB Leinster Club SFC Quarter Final against neighbours child, Blessington on Sunday in St Conleth’s Park at 1pm. 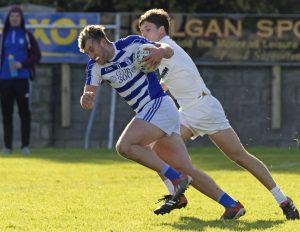 Naas will look to Darragh Kirwan against Blessington on Sunday Photo: Sean Brilly

Naas rolled back the years to win their first county championship in 31 years last month and while they showed a lot of flair and skill in the early stages of the Kildare championship they had to stave off a late Sarsfields challenge in the Final to win the day. Perhaps it was that experience that brought them through against Tullamore in Round 1 after two quick second half goals rocked the county town right back on their heels.

Naas have stars all over the field with the likes of Aaron Browne, Paddy McDermott, Jack Cleary, Brian Byrne, James Burke and the aforementioned Kirwan but in player manager, Eoin Doyle and captain, Eamonn Callaghan, they have two warriors who lead by example and drive others to follow.

It is imperative that both these players remain on the pitch for the entire match.

What of Blessington. Nobody can ever accuse them of not being brave either. They came through a very tough county campaign, beating Baltinglass by a point in the final (0-11 to 0-10) and then had to come from behind in the Leinster Championship Round 1 to defeat the experienced Longford Champions, Mullinalaghta by two points, 1-5 to 1-7, after training 1-5 to no score in the first half. The Wicklow champions have Dublin’s Philly McMahon in their corner so they will be well fired up.

Both teams will know each other well particularly since many, on both sides, would have played on Naas CBS sides including the Hogan Cup team of a few years ago.

Expect it to be a cagey affair but Naas have enough to see them through to a Leinster semi final in Croke Park in two weeks.