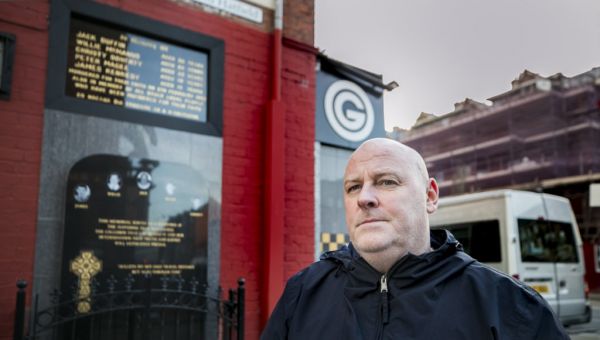 Two police officers who arrested a Troubles shooting victim at a commemoration event in Belfast will not face prosecution.

Northern Ireland’s Public Prosecution Service said it would not be taking action against the two officers involved in the incident on the Ormeau Road in February.

The officers were investigated by the Police Ombudsman on suspicion of assaulting Mark Sykes as they arrested him at the memorial event for victims of a loyalist gun massacre in 1992.

The controversial incident unfolded when police challenged those attending amid suspicions the size of the public gathering breached coronavirus regulations.

The participants were paying respects to those who died when gunmen from the Ulster Freedom Fighters opened fire inside Sean Graham’s bookmakers shop.

Mr Sykes, who was shot several times in the terrorist outrage, was handcuffed and arrested in chaotic exchanges captured on social media.

Mr Byrne apologised for the PSNI’s handling of the event.

One of the officers was suspended and the other was moved to another role.

The disciplinary moves were heavily criticised by the Policing Federation which represents rank and file officers.

The Police Ombudsman, which investigates allegations of misconduct and criminal conduct by police officers, looked into the incident after receiving a complaint from Mr Sykes and subsequently sent an evidence file to the PPS for consideration.

On Wednesday, the PPS announced that it had decided not to prosecute the officers.

It said the evidence was subjected to an impartial and independent application of the PPS’s test for prosecution. The PPS said it was also assisted by advice received from independent legal counsel in reaching its conclusions.

He said the officers were not aware of the background to the gathering and came across it whilst on patrol.

“The complaint related to the actions of the officers in arresting and handcuffing one person during the incident,” he said.

“Having carefully considered the available evidence, the PPS decision was that there is insufficient evidence to prove that the actions of the officers in arresting the civilian, and applying handcuffs to him, were unlawful.

“Separate consideration was given to whether an omission to remove the handcuffs after a period of time had passed could amount to an assault by a police officer. Again, after a thorough examination of all matters, it was concluded that the test for prosecution is not met for any assault arising from that aspect of the complaint.”

Mr Hardy said Mr Sykes had received detailed reasons for the decisions not to prosecute in writing, along with an offer to meet to address any further questions.

“We are acutely aware of the deep sensitivities attached to this case, and the distress caused to the complainant through being arrested at an event to remember an atrocity which those present were so directly and profoundly impacted by,” he said.

“I would like to reassure the public that these decisions were taken impartially and after a full consideration of all relevant matters.”