KILDARE soccer and rugby teams learned their fates following draws that were made in their respective competitions on Wednesday evening. 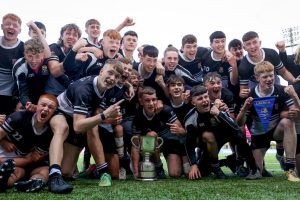 In soccer, Maynooth University Town FC, who reached the semi finals of the Extra.ie FAI Senior Cup before losing out to finalists, Bohemians, have been drawn at home against Bangor FC from Greenhills in Dublin in the Fourth Round of the FAI Centenary Intermediate Cup, with fixtures to be played on weekending 23 January.

Meanwhile Athy Town FC are also at home as they have drawn against the famous Limerick club, Pike Rovers in the Fifth Round of the FAI Centenary Junior Cup with the game to be played on weekending 16 January.

In Schools Rugby Newbridge College, joint winners, along with Clongowes Wood College, the last time the Competition was played, have been drawn away to St Gerard’s School, Bray, in the 2022 Bank of Ireland Leinster Rugby Schools Senior Cup while Clongowes have been drawn at home to Gonzaga College from Ranelagh. Newbridge recently appointed Johne Murphy as Director of Rugby while Clongowes Wood have another former Munster man, Tomas O’Leary in that position.

Meanwhile in the 2022 Bank of Ireland Leinster Rugby Schools Junior Cup, holders Newbridge College have been drawn at home to Cistercian College, Roscrea while Clongowes Wood College are drawn at home to a Qualifier from the Fr Godfrey Cup Competition.

In club competitions Cill Dara RFC have been drawn away to Navan RFC in the First Round of the 2022 Bank of Ireland Leinster Rugby D’Arcy Cup while Naas RFC and Athy RFC have each been given a bye into the Second Round.