IT could be Super Saturday for the camogie players of Celbridge as they battle for double honours in the finals of the 2020 AIB Leinster Club Intermediate and Junior Championships, both of which take place in Conneff Park in Clane. 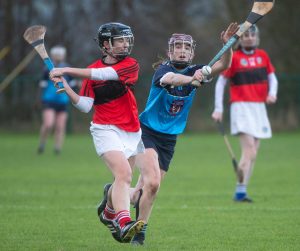 Hannah McDonnell will be in action for Celbridge on Saturday in the 2020 AIB Leinster Intermediate Camogie Final in Clane Photo: Denis Byrne

Led by the very experienced Susan Carroll, who scored 1-5, Celbridge had to pull out all the stops to defeat O’Moores of Laois in difficult conditions in Rosenallis on Saturday last.

Reflecting on that victory, Celbridge Manager, Noel McMahon, who manages both teams along with Paraic Carty said, “We were probably lucky in a way. They missed a few good chances but in fairness we missed a few good chances as well. It was a horrible day and trying to keep the hands warm was the biggest problem but it was probably even colder the week before against Kilmessan (Meath).”

“We have had two tough away games and I suppose that has set us up a bit for the Finals but we are well up against it. St Rynagh’s are the reigning Leinster Intermediate champions and they would probably have been favourites to win it from the start.”

Commenting on his team and in particular the long serving Susan Carroll, Clare native McMahon said, “The Covid restrictions probably rejuvenated her. She had been playing with injuries for years and the break gave her body a chance to recover and she is flying again, At the end of the day though, it’s a team effort, a team of 20 or 21 really. We have a lot of very good players. Emer Reilly and Emma Barry are strong in defence but really we’d be looking at everybody and we need everybody to perform to their optimum on Saturday. It’s just going to take a phenomenal effort.”

McMahon cited a high work rate from the start as being vital and coupled with the strength off the bench this would give his side a chance. It’s been a good year for Celbridge in Kildare as they won senior and intermediate leagues as well as senior and intermediate championships which has been a big work load for McMahon and Carty.

“We have some of the successful U17 team of a few years ago and some of this year’s U17 team,” McMahon tells us as he says having both the Junior and Intermediate teams training together has benefitted the club. “We have a good mix of youth and experience.”

“It’s a help to be playing as near to home as we possibly could (in Clane), after being away for the last couple of games. In both games we are playing the reigning Leinster Champions so we will be well up against it but we’re there. We’ll work hard and we’ll let the result look after itself. We are extremely proud and happy to be in the finals and it will be just one more push hopefully. We get great support from the club. Everyone has the same standing as regards pitches etc and the support from the club has always been there,” Noel McMahon concludes.

While it may be a tall order for Celbridge, in both finals, they will not be found wanting on what could be a great day for Kildare Camogie.