THE hurlers of Naas and Maynooth bring the hope and expectation of Kildare as the face Kilkenny and Offaly opposition in the semi finals of the AIB Leinster Club Intermediate and Junior Championship semi finals, respectively, on Saturday. 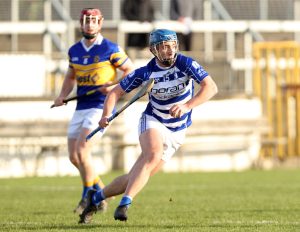 Both will have home advantage, on this big day for Kildare club hurling, with Kildare’s senior champions, Naas, facing the once mighty Glenmore of Kilkenny in the AIB Leinster Club Intermediate semi final in St Conleth’s Park at 1pm while the county’s Intermediate champions, Maynooth, will face Offaly’s Shamrocks at the Junior penultimate stage at Manguard Plus Kildare GAA Centre of Excellence, Hawkfield at the same time.

Maynooth have been boosted by their recent return to senior status in Kildare and are playing with a bit of style and swagger and no little resilience. They are built on a sound defence, a strong midfield and a forward line that is capable of racking up a decent score. Last time out they had to overcome a little ring rustiness to defeat Trumera of Laois by eight points, 1-18 to 1-10.

Work rate identifies the Maynooth performances according to their Manager, Tom Walsh. “It was a workman like performance is how the Tipperary native described the victory over Trumera. “We pride ourselves in how hard we work,” he added. While David Qualter may have grabbed the headlines with his 0-11 haul in the quarter final, all from placed balls, his manager, while praising the Kildare U20 player, was quick to point out the support he received from out the field from the other players.

Starting with goalkeeper, Sean Bean, Maynooth have plenty of intercounty experience with the likes of the Forde brothers, Cian and Tadhg, now battling their way through Ireland’s Fittest Family, Cathal McCabe, what a great season he is having with the big ball and the sliotar, Harry Dunne, Cian O’Neill and the aforementioned Qualter. Add in the likes of Mikey Gillick, Willie Lambe and Mick Dunne and you have a formidable outfit entering the fray.

Offaly representatives, Shamrock’s of Mucklagh, had a comprehensive 2-18 to 0-3 win over Meath’s Boardsmill in their quarter final.

With the quarter final victory under their belt Maynooth should be very much “match ready” for Saturday and as Manager, Tom Walsh said, “Shamrock’s are a quality side and are going to bring a serious standard to us on Saturday and we are going to have to rise to that.” Based on their performances in 2021 you would expect Maynooth to bring their “A” game on the day.

If Maynooth are facing a serious standard then Kildare’s senior champions, Naas, are facing an equally difficult task as they face the one time kingpins of Kilkenny, Glenmore. Winners of the All Ireland Senior Club Hurling Championship in 1991, Glenmore boost a string of famous Kilkenny names like the O’Connor’s Eddie and Willie, Liam Walsh, Christy Heffernan, Ger Alyward and Eoin Murphy, who was named All Star goalkeeper for 2021 on Friday night.

The Kilkenny side had a 2-17 to 1-12 over Ballinakill of Laois in the Quarter Final with 0-8 (all frees) coming from Alan Murphy, 1-3 from Ger Alyward and a goal from substitute David Burke. Murphy, the goalkeeper, usually lines out at centre half back for his club.

Three in a row Kildare senior champions, Naas, breezed through the county championship but had to fight tooth and nail to overcome Celbridge in the final. They had a convincing 1-21 to 1-6 win over 14 man Castleknock, even if they were shocked by the Dublin side’s goal just after the sending off.

They too will be buoyed by national recognition as their captain and dual player, Brian Byrne, has been named in the Joe McDonagh Team of the Year. A few of his club colleagues on the Kildare team should count themselves unlucky not to have received that recognition also.

Jack Sheridan, not for the first time, was scorer in chief for the Kildare champions last time with 0-10 including seven frees, a ’65 and his renowned sideline cut. Naas are not a one man scoring machine, though. Sheridan’s cousin, Brian Byrne, another dual player, James Burke, and Shane Ryan can also contribute to the scoring with Ryan noted for his goal poaching exploits for club and county.

Goalkeeper, Cormac Gallagher, is probably one of the unsung heroes of this Naas team and in front of him he has teak tough defenders in Richard Hogan, Simon Lacey and Rian Boran.

When you add in the fact that Naas Manager, Tom Mullally, is a native Glenmore man then the game becomes even more intriguing. Mullally, though, who is also the Carlow senior hurling manager, doesn’t do sentiment and he will have Naas primed for the victory. It will be a huge task, no doubt, but these Naas players have gone in to Kilkenny’s backyard and defeated teams at underage level and if they play to their obvious potential there is no reason they cannot do so again on Saturday.