NEWLY promoted Kildare hurlers will get an early opportunity to avenge the heavy defeat by Meath in the 2021 Joe McDonagh Cup Play Off when they entertain the Royals in St Conleth’s Park in Round 1 of Division 2A of the Allianz Hurling League on Sunday 6 February at 2pm. The Meath Management team has been boosted by the inclusion for 2022 of coach, Saoirse Bulfin, who was part of Davy Fitzgerald’s coaching team at Clare and Waterford. 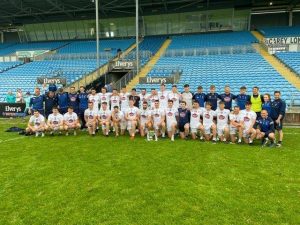 The Kildare team which defeated Mayo last June to gain promotion to Division 2A of the Allianz National Hurling League for 2022.

In Round 2 David Herity’s men must make the long trip to Austin Stack Park in Tralee to take on Kerry, who are now managed by former Waterford star, Stephen Molumphy. The match throws in at 2pm on Sunday 13 February. Kildare then travel from the the south west to the north east for Round 3 to take on Down in Ballycran on Sunday 27 February at 2pm. Matches between these two sides, including the 2020 Christy Ring Final, are always quite close.

Kildare’s final two game in the 2022 Division 2A Hurling League will be at home with Carlow the visitors to St Conleth’s on Sunday 6 March at 2pm and Westmeath coming to town on Sunday 20 March at 12.30pm, which will be a double header as the footballers face Monaghan at 2.30pm at the venue on the same day.

Kildare had titanic struggles against both Carlow and Westmeath in the Joe McDonagh Cup last year before narrowly losing to both.

This will be a difficult league for Kildare, for sure, and will be very much dependent on the availability of the Naas players and their progress through the club championship campaign. Naas, of course, are managed by Kilkenny man, Tom Mullally, who is also manager of the Carlow senior hurlers.