IN a recent edition of The Kildare Nationalist, our Columnist, The Supporter, paid a well deserved tribute to Pat Dunney, who recently stepped down as Chairman of Bórd na nÓg in Kildare and we reproduce that tribute here.

A name that came to mind a couple of times this week was that of Pat Dunney, firstly in the context of his quiet exit from the Bórd na nÓg chair and then when contemplating the ongoing workload of Naas dual stars James Burke and Brian Byrne. Younger readers may only know Dunney as the tsar of underage games but those of a different generation will remember him for his stellar playing days with club and county. 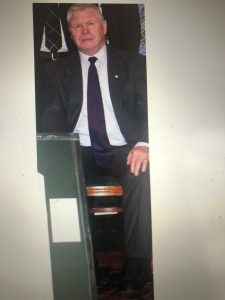 A renowned dual star who had the distinction of being the first Kildareman to win Railway Cup medals for both football and hurling, Dunney first appeared on the inter-county scene as a minor in the early 1960’s and he was the 17-year-old goalkeeper when Kildare’s first team won the All Ireland Junior Hurling title in 1962, the first national title won by a Kildare hurling team, although it would be followed by two more later that decade.

In football Dunney made his Kildare senior debut the following year and continued in the county jersey until the Leinster Final of 1978. He was centre-half forward and captain on the 1965 under-21 All Ireland winning football team and those leadership skills never left him.

Of course, Dunney ended up without even a single Leinster SFC medal, despite having appeared in five finals. He was quite adamant in a later interview why that famous under-21 crew failed to deliver on the adult stage. “We just didn’t put in the work,” he asserted in a 1993 interview.
“There was so much talent around at that time we could win matches far too easily up to a certain level. Then when the step up was required, we just hadn’t the preparation put in. Certainly, had we done the amount of slogging which this present (’93) generation have done, we’d have won something. Make no mistake about it.”

He put that waste of talent down to immaturity. “Yes, we had good trainers. People like Jim Clarke and Peter O’Reilly spring to mind and, of course, Eamonn O’Donoghue.” Pat spoke highly of the Sallins and, later, Johnstownbridge man. “Eamonn came on the scene far too late for the older members of our squad. Had we put in the effort back in the early days which we did under Eamonn, it might have been so very different.”

Dunney was a driving force behind the glory days of Raheens and won a remarkable 7 county SFC titles between 1964 and 1981, adding the Leinster Club SFC to that hoard in 1981. For Kildare he played on all lines of the field from half-back upwards and was a noted goal-getter and free-taker to boot.

Dunney later served as County Chairman and as a Selector and holds the unique distinction of captaining Raheens to their county title in 1981 while he was Chairman of the County Board. Vice- chair Mary Weld presented the cup in his place!

Many inside and outside the county, though, will have fond memories as Dunney the hurler rather than the footballer. Indeed, I was struck early this year when the Irish Post newspaper picked a 28- strong list of the greatest hurlers of the 1970’s. The names roll off the tongue for someone of my generation. Indulge me while I repeat their list here:

What a panel that would have made. I’d have some quibbles with the absence of Eddie Keher (Kilkenny) and Wexford’s Tony Doran, but how remarkable to see a Kildare man selected by the writer, who describes him as “a renowned dual star, who won provincial honours in both codes for Leinster, Pat had this never-say-die attitude, matched with great hurling intensity, and astute
vision.”

Such was his prowess with the stick that he held down a regular spot on Leinster Railway Cup teams for five consecutive years, having the unique distinction of winning inter-provincial medals in both codes in 1974, garnering five in all (four of them in hurling) and described playing in that company as “something magical I can tell you for a lad from Kildare.”

It all began for Pat at primary school in Prosperous where the master was Michael Brosnan, a man from the Kingdom who wore the jersey of Kildare with distinction. At post primary level, the remarkable dual skills were nurtured at the local St. Farnan’s by dedicated men such as Conor Morris, Liam McFadden, and Ray O’Malley.
In football he started off playing with Caragh but he joined a mass exodus down the road to senior club Raheens. In hurling, he played with Éire Óg, the hurling wing of Raheens who were founded in the 1950’s by men like Tom Johnson, Paddy Power (the former Fianna Fáil TD) and Pat Doherty. Between themselves and Ardclough, boosted by the Wexford Walshe brothers, Johnny, and Ned, they dominated the Kildare Senior Hurling scene for almost two decades.

Dunney won ten county senior titles with Éire Óg between 1964 and 1984, the first of those forming one part of a senior double with Raheens’ football crown. Éire Óg hadn’t won a senior title before the Dunney era. They haven’t won one since, either and next year the proud former giants will play at Intermediate level.

Pat was never one to go training teams after his playing days, bar a short stint with Ballyteague, although he was a selector for Kildare over the years. Instead, he went into administration, first becoming his club’s hurling delegate before becoming vice-chairman and chairman of the hurling board and eventually rising to the vice-chairman and chairman positions of the county board itself. He held the latter role for eight years.

Nationally, Dunney was held in such esteem that he was asked to chair the Hurling Development Committee which restructured the championships and introduced the Christy Ring Cup in that code in the early 2000’s.

In more recent years, younger players, their parents, and supporters have come to be familiar with Dunney in his Bórd na nÓg role, where he tended to divide opinion, earning the nickname in some quarters of “Biscuit Tin”, a reference one assumes to his preferred receptacle for collecting entrance fees.

A new era awaits with the merger of Bórd na nÓg and the North and South Boards, without Dunney at the helm it seems. Me? I’ll remember him fondly as the only Kildare player to feature on the Team of the Millennium in both codes. The greatest dual player in the county’s history.
Cill Dara Abú

The Supporter Column appears in The Kildare Nationalist each Tuesday