Kildare Senior Football Champions, Naas, are firm underdogs for the AIB Leinster Club SFC Final in Croke Park (5pm), on Saturday, that’s according to BoyleSports who have made Dublin Champions, Kilmacud Crokes, red hot 1/4 favourites moving them from 4/6.

Naas have been placed at 5/2 underdogs moving in slightly from 3/1 in the BoyleSports betting earlier in the week. 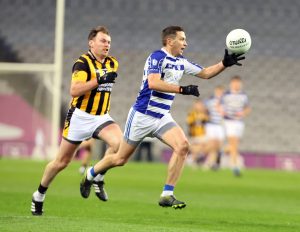 Kilmacud Crokes are the strong favourites to become AIB Leinster Senior Football champions on Saturday night, according to BoyleSports after edging out Laois Champions, Portarlington, 1-11 to 0-12 last month at Croke Park, just hours after Naas had beaten Wexford Champions, Shelmaliers, 2-15 to 1-13, after extra time, at the same venue.

Sarah Kinsella, spokesperson for BoyleSports said: “Kilmacud Crokes are all the rage with punters this week to go on and win the Leinster Club SFC title. We’ve trimmed their chances into 1/4 from 4/6 while their rivals Naas are now 5/2 underdogs from 8/1 prior to their victory over Shelmaliers.”

The underdog tag will suit Naas perfectly but Naas and Kildare supporters will know that the County Town team have been outstanding in repelling the excellent comeback from Sarsfields in the County Final as well as overcoming the likes of Tullamore and Shelmaliers, when all seemed lost.

The Bourke Cup seemed destined for Naas from an early point in the Kildare Championship, who says their name isn’t written on the Sean McCabe Cup also?