COMMON sense has prevailed at Leinster GAA with Saturday’s O’Byrne Cup Round 1 game, Kildare V Westmeath in St Conleth’s Park, now set to throw in at 1pm INSTEAD of the original 2pm. 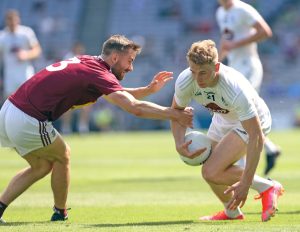 Kildare supporters will be looking forward to seeing Daniel Flynn in action against Westmeath in Glenn Ryan’s first game in charge at 1pm in St Conleth’s Park on Saturday. Photo: Sean Brilly

It was a strange decision to fix Glenn Ryan’s first game in charge of Kildare at 2pm, in the first place, given the interest in the former captain’s new Kildare team and the equal interest in Kildare supporters in travelling to Croke Park to support County Football Champions, Naas, in the AIB Leinster Final against Dublin’s Kilmacud Crokes, a match that throws in at 5pm.

A 2pm throw in for the O’Byrne Cup game would have afforded little time for supporters travelling from Newbridge to comfortably reach Croke Park in time for the Naas game.

On Tuesday morning Leinster GAA announced the new start time for Glenn’s first game which will allow the expected large attendance in St Conleth’s Park to travel on to Croke Park now to support Naas footballers, should they so wish.