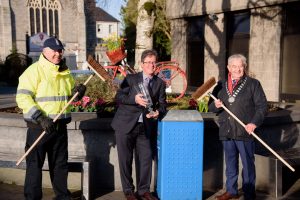 THE vice-chairperson of Naas Tidy Towns has praised the volunteers who helped land the big prize of ‘Ireland’s Tidiest Town’ yesterday (4 January).

“We could not have done it without them,” said Cllr Bill Clear, who unfortunately had to miss the formal presentation after a close contact.

He has been a vocal advocate for Naas Tidy Towns for a number of years, and has put his money where his mouth quite regularly, including helping to keep the Sunday canal walk tidy.

“Do you know what else we get a lot of? Monster [energy drink]! And Red Bull cans! You’d think with all that energy they’d be able to walk to the nearest bin,” he said.