Lots Of Sport In This Week’s Kildare Nationalist

IN Sport in our first Kildare Nationalist of 2022, out now, we cover GAA, Soccer, Camogie, American Football, Greyhound Racing and Horse Racing including: 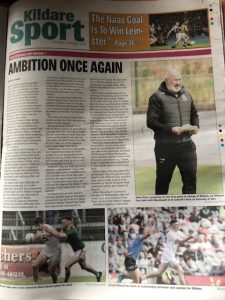 GAA: Preview of Glenn Ryan’s first match in charge of Kildare against Westmeath in St Conleth’s Park at 1pm on Saturday

CAMOGIE: Kildare’s Fixtures for the Littlewoods National League are announced

GREYHOUND RACING: Report from the final Race Night for 2021 from Newbridge Stadium

HORSE RACING: Niall “Slippers” Madden looks back at the Big Christmas Festival Races and the Lawlor’s of Naas Novice Chase

……and Much More in the Kildare Nationalist, in your shops now or online at www.kildare-nationalist.ie