AT 39 year of age he maybe “approaching” the twilight of his playing career but nobody has told Kildare legend and Naas captain, Eamonn Callaghan, that. He is still playing with the same youthful ability and flair that has marked his club and intercounty career over the last quarter of a century. 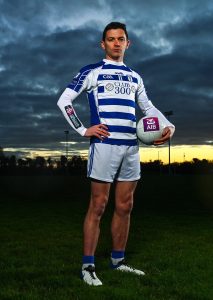 Naas (Kildare) footballer Eamonn Callaghan ahead of the AIB GAA Leinster Senior Club Football Championship Final, which takes place at Croke Park, this Saturday, 8 January at 5pm and will see the Kildare champions take on Dublin’s Kilmacud Crokes. Naas are set to feature in their first-ever provincial final whilst Crokes are chasing their fifth Leinster title.

Now after winning his first Kildare senior title in 31 years the man affectionately known as “Leper” is facing into a first AIB Leinster Club SFC Final against Dublin kingpins, Kilmacud Croke in Croke Park on Saturday evening at 5pm.

Callaghan faced the media, via Zoom, on Thursday to reflect on a “crazy” year, to explain the Team Management set up in Naas and to look forward to playing in Croke Park again so many years after finishing with Kildare.

“It’s just been crazy, I still don’t know what’s going on. It has just kept going and we’ve got a bit of momentum. When we got to Leinster it was a matter of trying to keep that momentum going. Luckily they decided to play the Leinster semi and final in Croker so that was an added bonus for everyone involved,” Eamonn said. “I have been lucky enough to play up there (in Croke Park) a good bit with Kildare but to play there with your club is just unbelievable. It was something you never thought you’d be doing. I’m still trying to get my head around it.”

Callaghan, along with another former Kildare captain, Eoin Doyle, have been part of “a player led” Management Team at Naas since the week before the County Final in Kildare with Doyle taking on the role of Player/Manager.

“When we decided to go down this route with Eoin Doyle as our Manager, I’m was just helping out but he takes the lead on it and a couple of lads involved with the club give him a hand. It was a one week, potentially a two week gig at the start to get us to a Co Final but never in our wildest imagination did we think that we would still be doing it in the New Year but we’re not complaining,” the captain added.

The new style management approach has worked for Naas according to Eamonn Callaghan even if it has it’s challenges and team selection has been difficult for every game. “There have been injuries, different lads not playing and suspensions but all the players understand that when we decided to go down this route of a player led management, it wasn’t just going to be just Eoin; all the players had to buy into what we were doing and really we have just been taking it in two week blocks,” he explained. “The training routine is  pretty much as we’ve had all year and the squad selection is just down to Eoin, who has the final call on it but he has lads on sideline who have been helping out at training and they take the reins on match days.”

The semi final against Shelmaliers of Wexford in Croke Park did bring back memories of his Kildare playing days for Eamonn Callaghan. “The build up was fine for me and coming out on the pitch was fine but within the match then, especially the way the semi final went we were chasing the game and we probably weren’t performing as well as we should have and Shelmaliers were on top for the majority of the game, that brought a similar feeling to what I would have had with Kildare unfortunately. We were trying to get ourselves out of a hole and get ourselves back into a game. I had that kind of experience and I was thinking about that during the game. Is this just going to be another heartbreak for me in Croke Park? Luckily we were able to stay in the game and we got those couple of chances at the end. The goal obviously changed the game for us and we were able to get over the line in extra time,” he said.

A first County Title in 31 years and now a Leinster Final has obviously had an impact in Naas GAA club. “It’s been mad but I think the games every two weeks have been great as we haven’t gotten too distracted from it. We’re still focussed and still trying to train the way we have been but it’s hard to avoid (the excitement)around the town,” the captain tells us. “There is a great buzz around the place. I would have experienced that with Kildare for big Leinster Finals and All Ireland Quarter Finals but for everyone involved with the club it’s been brilliant. It still probably hasn’t sunk in yet but you try not to let what’s going on outside distract you. We still have a big game to focus on but it’s still very enjoyable.”

Eamonn Callaghan is very aware of the task that will face his Naas colleagues on Saturday evening in Croke Park against Kilmacud Crokes.  “Any team that comes out of Dublin is immediately marked as favourites to win Leinster and rightly so. They are usually very well trained and very well organised and very fit with good skill levels. Dublin teams have won six out of the last eight Leinsters,” he adds. “We are aware of the magnitude of the task. They have had a lot of tough games but we have just been preparing as we always have. They have a lot of dangerous players. We hope that we can go up and put on a performance. If we play the way we can play hopefully we’ll be in with a chance of winning,” the captain believes.

On his longevity in the white jersey of Kildare and the blue and white of Naas Eamonn Callaghan has a few theories.” My uncle, Paddy Kelly,  played hurling for Limerick into his 30’s. He reached an All Ireland Final with Kilmallock and won an All Star. He comes to all our games and is a big supporter of mine. It’s great to give back to him what he had given to me.”

Callaghan was a great admirer of the new Kildare Management Team of Glenn Ryan, Anthony Rainbow, Johnny Doyle and Dermot Earley in their playing days. “I watched how they prepared and their commitment in training and I continued that on through my Kildare days and I followed in their footsteps and those of Damien Hendy and Roly Sweeney who played into their 30’s,” he says. “I never really took time off and I had an emphasis on injury prevention. Lately I keep myself fit and uninjured to keep the body right. I have been lucky with injuries. I still feel good, still feel I can train fully and play fully.”

Naas were firm favourites for the Shelmaliers but are now underdogs for Saturday’s Final but this is not something that Eamonn Callaghan really focus on. “We are aware of massive challenge ahead of us, a challenge we haven’t had to deal with this year yet. We have to be on the top of our game to be competitive here,” he concludes.

At an earlier media briefing on Thursday former Dublin star, Paul Mannion, expressed himself confident that he would be fit to line out for Kilmacud Crokes despite the knee injury he picked up in the semi final win over Portarlington.