Kings Of January Football – The Supporter

IN the week of Round 1 of the O’Byrne Cup, Glenn Ryan’s first match in charge and Naas Captain, Eamonn Callaghan’s dramatic introduction to the competition The Supporter looks at the history of the O’Byrne Cup and Kildare’s record in it in this week’s Kildare Nationalist, in your shops now or online at www.kildare-nationalist.ie.

As always, I’m open to correction but I believe there’s only one competition in Gaelic Games that sees Kildare sitting pretty on their own at the top of the roll of honour. No, it isn’t the Christy Ring Cup, although we jointly hold the record of three wins in that competition with Carlow and Westmeath. 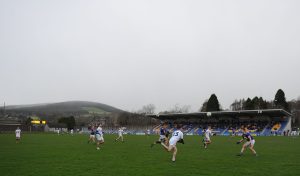 Kildare in action in the O’Byrne Cup against Wicklow in Aughrim in December 2019 Photo: INPHO/Tommy Grealy

The “Byrne Cup” (the O’ was added later) began life in 1954 and was named after a Baltinglass schoolteacher and Wicklow official called Matt Byrne.

Judging by the Nationalist of the day, its arrival was greeted with little enthusiasm or fanfare, with ne’er a mention of it the week before Kildare’s opening game and a scant report the week after. Spectators were thin on the ground when the Lilywhites took to the field in
Drogheda on 11 April with the Drogheda Independent reporting that the fixture, “played in almost ideal conditions, attracted a small crowd (gate £45), made up mainly of supporters from the Drogheda area.”

Any travellers from the Short Grass would have endured a miserable return journey. The Drogheda paper tells us that “judged by any standards, this Kildare side was a poor one – certainly it bore little comparison with the great Lilywhite teams of years gone by.”
Kildare shipped six goals that day, the worst concession of green flags in their storied history up to that point, and only surpassed twice since then Kerry putting seven past Ollie Crinnigan in 1978 and similarly punishing Mark Donnellan in 2015.

It was a competition that took us a long time to warm to. We lost finals to Wicklow, Dublin, and Westmeath before claiming the trophy for the first time in 1962, beating Louth by 2-6 to 1-6 in a final held in Croke Park of all places. Athy’s Mick Carolan and Moorefield’s Paddy Moore dominated midfield but it was the introduction of Seamus Nugent from Ballyteague as a substitute in attack that swung the game in Kildare’s favour, having trailed by three points at half-time.

Kildare’s ascension to the top of the roll of honour was a slow one with titles trickling in. There were four between 1968 and 1976 inclusively, the October 1973 decider against Dublin in Naas proving a real highlight. Brian Doherty of Athy scored a hat-trick of goals as Kildare racked up a 3-11 to 1-4 win over the experimental Dubs line-up.

Those Dubs of course, under Kevin Heffernan’s tutelage, would be All Ireland Champions less than twelve months later while all Kildare had to show for the remainder of the ‘70s was the 1976 O’Byrne Cup Final triumph over Wexford.

The competition wasn’t always a pre-season affair and often it was a moveable feast that mitigated against it gaining traction. In the eighties it was often played in the seemingly interminable gap between the end of the league and the start of the championship. My first recollection of the competition was when Dublin came to Newbridge in late April of 1982 for a semi-final clash.

Kildare were missing the injured Larry Tompkins I remember but that didn’t stop us sending the light blues packing on a 0-13 to 0-9 scoreline. The Nationalist, getting a little carried away perhaps, declared that the Lilywhites “will be very real contenders for the Leinster SFC if they can maintain their recent rate of improvement.”

On the most miserable of dark, wet, and windy May days, Kildare were too good for Wicklow in the final, a game I’ll always remember as Shay Fahy’s debut. Not named in the starting line-up or subs the week beforehand, the Sarsfields army man of Galway extraction, lined out at full-forward, scoring a crucial goal.

Sadly, that “rate of improvement” was not sufficient when it came to the Leinster Semi-Final re-match with the Dubs in Navan, although Kildare weren’t a million miles away. Tompkins ran rings around Mick Holden but local referee Kevin Campbell incurred the ire of manager Bobby Burns, with Nationalist reporter Paul Donaghy writing that there was “one rule for Kildare and one, more lenient one, for the City side.” The 41st minute sending off of Johnny Crofton was particularly harsh and inconsistent with the treatment of similar offences by players in light blue.

Seven years later Donaghy was bigging Kildare up again on foot of an O’Byrne Cup triumph. The Tuesday night final against All Ireland champions Meath in Newbridge came hot on the heels of a famous challenge game win over the same opposition in Summerhill (the day Meath failed to score).

Declan Kerrigan’s two goals sent Kildare on the way to the trophy by a five- point margin and Donaghy questioned “How many teams toppled the All- Ireland champions in successive matches, without having a fighting chance in their provincial championship? On that assumption Kildare must entertain a sporting chance against Dublin in Newbridge on 5 June.”

That Leinster Quarter Final unfortunately saw Kildare miss out by four points again, in a niggly affair, despite Liam Miley’s goal, with Kieran Duff scoring Dublin’s major at the Kilcullen End from a sideline ball that should have gone the other way.

Although Kildare reached the following year’s final (1990) they lost to Louth in a low-scoring affair a fortnight before the disastrous championship exit to Wicklow in Aughrim, the drastic result that triggered the headhunting of Micko. Dwyer regarded the competition much as you would a turd on your shoe and it is no coincidence that Kildare did not return to a final for thirteen years, by which time the Kerry great had moved on to Laois.

The competition was now played in January, as preparation for the League and new manager Pádraig Nolan used it to good effect on taking over from Micko, his charges defeating Dublin by a point in Portmarnock before triumphing over Longford in Pearse Park by three points in front of a remarkable 7,000 crowd.

Nolan had brought a young lad named Eamonn Callaghan from Naas into the Kildare team that month and he impressed both Martin Breheny and Eugene McGee, neither of whom were prone to praising Lilywhite players or teams, in the Irish Independent.
Breheny described Callaghan, who played corner-back in the final, as “a real gem who has looked an excellent prospect so far and decorated his rising stature with a fine exhibition of intelligent defending.” I wonder what happened to that fella?

Eight blank years passed before Kieran McGeeney brought Kildare to three finals in a row (2011 to 2013). Two stoppage time goals from Ronan Sweeney (pen) and Keith Cribbin thwarted Louth in 2011 before DCU beat us on a February Friday night in 2012.
The 2013 final in Parnell Park saw Kildare’s peak O’Byrne Cup performance, Mikey Conway lifting the trophy after an extra-time triumph over Dublin that saw many of the under-21 side of that year contribute handsomely with Niall Kelly and Paddy Brophy particularly prominent in attack.

A year later, new manager Jason Ryan had Kildare flying in pre-season and they were too good for Meath in the final in Newbridge as the Lilywhites clinched the trophy for the eleventh and, so far, last time. The Royals have edged ever closer to joining us at the top of the roll of honour, wins in 2016 and 2018 moving them onto the ten-win mark.

On Saturday next this competition throws in for its 68th year. It is unlikely Glenn Ryan will prioritise it any more than his old boss Micko did. The new Kildare manager presumably will use it to have a look at as many of his new panel as possible. Your guess is as good as mine how Kildare will line-up and how they’ll play.

I’ll cherish the opportunity to see new players in action in competitive action in front of a decent crowd, though. It is hard to imagine any revamped calendar coming out of Congress this year will prioritise its survival. That may be pragmatic and sensible but a part of me will mourn its loss. We are after all, the Kings of January football.

The Supporter Column appears in The Kildare Nationalist each Tuesday.