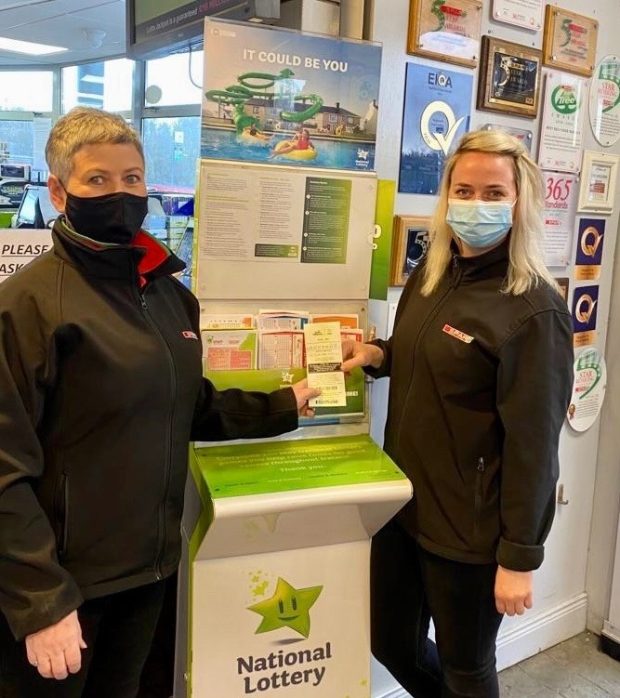 Pauline Murphy and Lauren O’Reilly of the Crookstown Service Station in Crookstown village,

A EuroMillions player who played their ticket in Crookstown Service Station became the biggest winner of Friday night’s EuroMillions draw in Ireland after winning the top prize of €500,000 in the EuroMillions Plus game. The winning Quick Pick ticket was purchased on the day of the draw . This is the second big lottery for Co. Kildare this week after another Kildare player became the first National Lottery millionaire of 2022 after they won the €1 million Daily Million top prize last Wednesday.

Seamus O’Reilly who owns the Crookstown Service Station is no stranger to big National Lottery wins. In April 2021, one of his customers won a €1 million top prize in the Lotto Plus 1 game while in 2007, he also sold a Lotto jackpot ticket worth €2 million to one of his customers: “You always know there’s good news coming when you receive a call from the National Lottery late at night,” laughed the popular store owner.

“We are a local store in a small community here in Crookstown and to have three large lottery wins like this is unbelievable. It’s such a close-knit community and once the word gets out, I know everybody in Crookstown will be absolutely delighted for whoever the winner is. I’m lucky to have seen big lottery wins in my store throughout the years and to see the level of excitement in my customers’ faces as they walk through the door is absolutely priceless. We’ll enjoy the win here in Crookstown today for sure and we all hope that somebody in the community is the winner of the €500,000 prize,” he said.

The Kildare winner, who now has a ticket worth €500,000, is advised to sign the back of their ticket and keep it in a safe place. The winner should contact the National Lottery prize claims team on 1800 666 222 or email [email protected] and arrangements will be made for them to claim their prize.

As there was no winner of the €30,434,021 jackpot on offer last night, Tuesday night’s jackpot is now set to roll to an estimated €40 million.