Disappointment For Naas In Leinster Final

By Richard Commins
THE AIB Leinster Senior Football Club final proved a step too far for Kildare champions Naas as they ground to a halt in the second half against a more clinical Kilmacud Crokes side in Croke Park on Saturday evening. 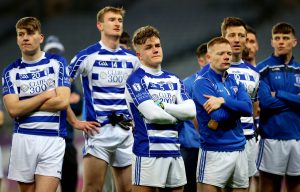 There is no shame in defeat at this stage of a long championship campaign that saw them record ten straight wins, but it was familiar territory for Kildare teams, losing to Dublin opposition in a Leinster Final after giving it their best shot in the first half.

Naas went in trailing by a single point but you worried that their profligacy in front of the posts, in marked contrast to Kilmacud’s efficiency, would be their downfall. And so it proved.

How different it might have been if Darragh Kirwan had not succumbed to a calf muscle tear or if Paul McDermott and Alex Beirne weren’t ruled out with hamstring injuries. But as player-manager Eoin Doyle rightly pointed out afterwards, Crokes were missing Paul Mannion and others as well.

It might also have been different had Dermot Hanifin’s early goal attempt found the net instead of being pushed out for a ’45 by Crokes ‘keeper Conor Ferris.

There was no doubt, though, that the Dublin champions, shocked by Mullinalaghta at this stage three years ago, were full value for their fifth Leinster title. They absorbed everything Naas threw at them in the first half and scored freely on the counterattack before closing the game down with superb game management during a second period in which Naas failed to score.

Naas had a lot of possession in the opening quarter but found themselves 0-4 to 0-1 behind before Paddy McDermott’s point gave them a boost heading into the first water break. They improved after that and points from Hanifin, Luke Griffin and Callaghan saw them into a one-point lead after 20 minutes.

Crokes upped their game though in the run-up to half-time, outscoring Naas by four points to two to go in a point ahead (0-8 to 0-7), the Naas scores coming from Hanifin and Callaghan.

Callum Pearson, Mannion’s replacement, opened the second half with a point to stretch the lead to two and by the second water break further scores from Ferris, Dara Mullin and Aidan Jones saw them in command at 0-12 to 0-7. Mullin’s effort might have been a goal but for a brilliant deflection from Cathal Daly.

The Dublin side played keep-ball to perfection and try as they might Naas struggled to fashion the goal that would get them back into the game. The closest they came was when Doyle crossed into the goalmouth and a knock-down reached Callaghan but his attempt to squeeze one into the corner was foiled by a stray Kilmacud leg, deflecting it out for a ’45.