By Richard Commins
IT won’t mean much in the long term but Glenn Ryan’s reign as Kildare senior football manager got off to a winning start at St Conleth’s Park on Saturday afternoon as his blend of youth and experience ran out the most comfortable of winners against an even more experimental Westmeath outfit. 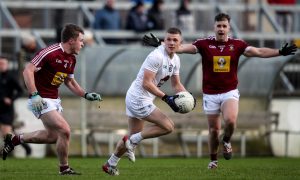 Paddy Woodgate was to the fore on his senior debut for Kildare against Westmeath in the O’Byrne Cup in St Conleth’s Park on Saturday Photo: INPHO/Evan Treacy

Kildare of course are facing into a tough Division 1 league campaign which throws in against Kerry in three weeks’ time and it was no surprise they were more up to the pitch of the game than their opponents who are preparing for Division 3 and started with only two of the team who gave the Lilywhites such a hard time in the Leinster semi-final last summer.

Ryan’s side played an attractive style of football for this time of year, with the foot-pass favoured over laboured hand-passing movements, with Paul Cribbin at centre-forward a key exponent of that particular skill.

With five debutants starting and a few more returning having not been involved with Jack O’Connor last year, it will be a big surprise if this team bears much resemblance to that which takes the field against Kerry but the likes of Paddy Woodgate in attack, wing-back duo Tony Archbold and Jack Sargent and midfielder Kevin O’Callaghan will have staked a claim for inclusion in Ryan’s league panel.

Woodgate and Jimmy Hyland were the main scoring threat for the home side, weighing in with thirteen points between them, with Ballyteague’s Hyland accumulating six from play (seven in all) and his former under-20 county colleague Woodgate scoring six (four from frees) on his senior debut.

Both were guilty of one or two embarrassing close-range misses as well but Westmeath were never likely to punish them. Kildare had effectively burned off the Lake men’s challenge before half-time and were 0-9 to 0-2 ahead when O’Callaghan’s black card for an off-the-ball tug on Ray Connellan gave Jack Cooney’s men some respite.

Westmeath scored three of their eight points during O’Callaghan’s absence but still trailed 0-11 to 0- 5 when he returned early in the second half and with the raft of substitutes disrupting the pattern of the game from there on, Ryan’s charges went on to stretch the gap to eleven points. It could have been more, Kildare having registered 32 attempts in all, but Ryan and his All-Star management team will be happy enough no doubt with a relatively straight-forward opening day win.

A win against Carlow on Thursday night in Netwatch Cullen Park will clinch a semi-final berth for the Lilywhites. A poor Westmeath side only had two scorers all game, Connellan and Luke Loughlin, with only three of their points coming from play.