SCOIL Mhuire, Clane, qualified for the semi-final of the Leinster PP ‘A’ Football Championship on Tuesday afternoon following a three point win over St Mel’s College of Longford, played at the former Athlone IT  now known as TUS. 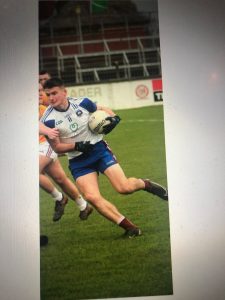 Newtown Gaels, Darragh Swords, who was outstanding at midfield for Scoil Mhuire Clane in the victory over St Mel’s College Longford on Tuesday Photo: Martin Rowe

The Clane school, managed by Raheens and Kildare’s Liam Power, enjoyed an 11 point lead (3-4 to 0-2) at the end of the first half but had to fight off a stiff comeback by the Longford College before emerging three point winners.

Played in perfect conditions Mel’s opened the scoring with a Matt Carey point which was cancelled out by Alan Fanning for the Clane side by the 10th minute. Carty scored again but a free kick from Scoil Mhuire’s midfielder, Darragh Swords from Newtown Gaels, was flicked to the net by another Newtown Gaels player,  JP Gill, for the first of their three first half goals.

Goal number two came just before the first half water break through Oisin O’Sullivan, brother of Kildare senior player, Shane. A three man move involving DJ Percival, JP Gill and Sean Tighe ended with Alex Lenihan from Allenwood finishing the ball to the net on 23 minutes and when they added two points from Darragh Swords frees and one from play

Two pointed frees from Swords and a point from play by Percival saw the Clane side go in comfortably 11 points up at the break.

On the restart Mel’s outscored Scoil Mhuire by 0-3 to 0-1 with Adam  Donnelly, substitute Michael Flynn and a Matt Carey free all raising white flags before the Clane side were on target again through Gill.

With St Mel’s now dominating Paddy Moran added a point before reducing the deficit further with a penalty after Daire O’Doherty was penalised for a foot block for which he received a yellow card.

The pressure continued on the Clane side after the second half water break with Moran and Michael Flynn adding points to leave just three points between them with five minutes remaining. However thanks to some outstanding defending by Clane and in particular

Scoil Mhuire certainly had their backs to the wall but some stout hearted defending, particularly from Alex Kehoe, Swords and Percival, saw them hold out for the three point victory.