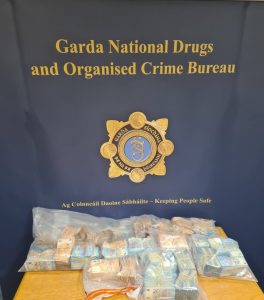 GARDAÍ have seized almost €0.5m in hard cash in a seizure at Dublin Port on Monday evening (10 January), in what will be a major blow to organized crime in the city.

At approximately 8.15pm in the course of an ongoing investigation targeting persons suspected to be involved in organised crime, personnel attached to the Garda National Drugs and Organised Crime Bureau (GNDOCB), intercepted a heavy goods vehicle, having exited the Port Tunnel at Dublin Port.

In the course of the search of the vehicle, cash totalling €488,000 was located and seized.

Today, in the course of this investigation, the GNDOCB arrested one male, age 34, and he is currently detained under S50 of Criminal Justice Act, 2007, at Mountjoy Garda station, Dublin.

The detained person was arrested arising from suspicion associated with his alleged involvement in an offence of participating in the activities of a criminal organisation, to facilitate money laundering, relating to the suspected proceeds of drug trafficking, pursuant to the provisions of section 72 of Criminal Justice Act 2006.

“The outcome of this operation today reflects the fact that, in 2022, the Garda National Drugs & Organised Crime Bureau will continue to prioritise the targeting of assets that are believed to be proceeds of crime, with a view to seizing the assets and initiating prosecutions in relation to those suspected to be engaged in money laundering and associated offences,” said DC Seamus Boland, Head of the GNDOCB.

The investigation is ongoing and further updates will follow.