KILDARE Manager, Glenn Ryan, has named the team to face Niall Carew’s Carlow in Round 2 of the O’Byrne Cup which takes place in Netwatch Cullen Park on Thursday evening at 7.30pm. 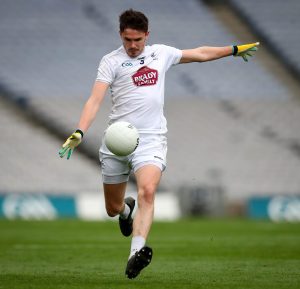 There are a number of changes from the team that scored a convincing 11 point win over Westmeath in St Conleth’s Park on Saturday last but a number of experienced heads and newcomers who made an impression against the Lake County have been retained for Thursday night. Among those retained are Ryan Houlihan, in defence, Kevin O’Callaghan and Kevin Flynn in midfield as well as forwards Paul Cribbin, Padraig Tuohy and Paddy Woodgate.

A number of experienced players like David Hyland, Darragh Malone, and Daniel Flynn, who made cameo appearances last Saturday will start on Thursday night while other substitutes from Saturday like David Randles, Michael Joyce, James Murray, Davy O’Neill and Eoghan Lawless will be in from the off in Netwatch Cullen Park.

Moorefield’s Tom Kinsella gets a start between the posts against Carlow.

Among those still missing from the panel include Mark Donnellan, Kevin Feely, Aaron Masterson, Fergal Conway, Ben McCormack and Neil Flynn while the Naas players are still being rested and Niall Kelly has stepped away from intercounty football.

A win for Kildare on Thursday night would see them advance to the O’Byrne Cup semi finals next week.