By Richard Commins
AN energetic Kildare were far too good for a second-string Carlow outfit at Netwatch Cullen Park on Thursday night, the Lilywhites powering to a eighteen-point win that sees them through to the semi- final of the O’Byrne Cup. 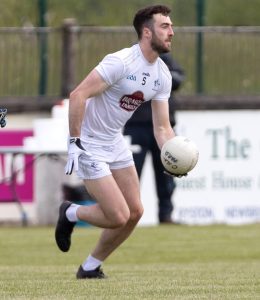 Kevin Flynn scored two of Kildare’s goals in the defeat of Carlow in the O’Byrne Cup, Round 2 on Thursday evening Photo: Sean Brilly

Kildare themselves have something of a new look under Glenn Ryan so far with a number of senior players unavailable so far. Tom Kinsella, the experienced Moorefield goalkeeper made his first appearance at this level and three others, David Randles, Michael Joyce, and Davy O’Neill were making their first starts.

Just as they had done against Westmeath five days earlier, Kildare hit the ground running, looking fitter and faster than Niall Carew’s Carlow charges. They were 0-6 to 0-1 ahead after 12 minutes before lively corner forward Conor Crowley stunned them with a well-taken goal for the home side.

That merely prodded the bear. From the kick-out a lovely move involving Paddy Woodgate ended with Kevin O’Callaghan’s handpass over the last defender finding his Celbridge colleague Kevin Flynn bearing down on goal. Flynn neatly sidestepped goalkeeper Ciaran Cunningham to fire the first goal for the Whites.

By half-time, Kildare had stretched the lead to nine points (1-12 to 1-3) with Daniel Flynn and Woodgate accounting for three points each.

The second half saw Carlow come more into it, as both sides ran their benches, but Kildare added three further goals to stretch their lead.
Davy O’Neill accounted for two of those, his first finished to the net after a pass across goal from Eoghan Lawless after 47 minutes, the second in injury time after a one-two with James Murray. In between, Kevin Flynn had fired home his own second goal after 53 minutes from a Brian McLoughlin pass.

Daniel Flynn ended his first start of the year with five points (four from play) and he proved unmarkable for the rookie Carlow defence, while Woodgate accounted for six points just as he did against Westmeath, four of his points coming from a flawless place-kicking display.

Kildare will play the winners of Group B (one of Meath, Wexford, Wicklow, or Laois) in the semi-final.